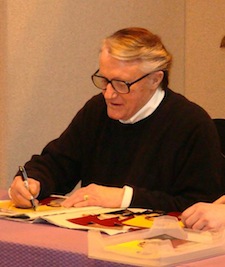 Legendary screen and stage actor Robert Vaughn will be screening his classic 1968 film Bullitt at the Ridgefield Playhouse in Ridgefield, CT (event details below). Following the screening, he’ll also be doing a Q&A and a book signing of his autobiography “A Fortunate Life.”

A veteran of stage and screen, Vaughn was nominated for a Best Supporting Golden Globe and Oscar almost right out of the gate, for his role in The Young Philadelphians (1959), opposite Paul Newman. The following year, he shared a titular role alongside Steve McQueen in the classic western The Magnificent Seven. Following his performance as Napoleon Solo in the TV series The Man from U.N.C.L.E. (1964), came a string of hugely successful years as an international TV star. Then in 1968, he once again shared the big screen with Steve McQueen co-starring in Bullitt. Among his many TV roles are included appearances on Columbo, Murder She Wrote, Law & Order, and currently, the TV series Hustle. He’s also currently in pre-production for a modernized reboot, titled The Magnificent Eleven. Among his stage roles, Vaughn has appeared in Tom Stoppard’s The Real Inspector Hound, and on Broadway in A.R. Gurney’s Love Letters.