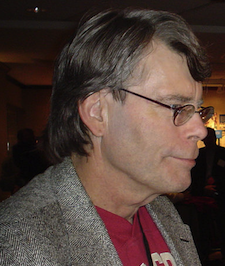 It appears Stephen king may be headed to Europe sometime this year for a book signing tour – and more specifically, France and Germany. A forum moderator on King’s official website has recently reported,

“I’ve heard back from Steve, who’s given me the okay to pass along the information he’d shared last week when I’d asked about book tours. He told me he will be going to France (and probably Germany) for a book tour so it’s not a matter of “if,” but rather a matter of “when.” I’ll post updates as they become available.”

As to what book? Well, his next novel – 11/22/63 – about a man who travels back in time to prevent the JFK assassination, is due to be released on November 8th of this year… so right now I would say it’s the prime suspect behind the reason for this possible tour. Stay tuned to Book Signing Central by signing up for our Email Newsletter and we’ll keep you posted as more of the details unfold.

And speaking of 11/22/63, November 8th could be your lucky day, because Very Fine Books is holding a drawing and ten winners will be chosen at random to receive a First Edition/ Trade Edition of the novel. Sign up for your chance to win 11/22/63 over at Very Fine Books today. And if you’re an avid Stephen King collector, check out this list of collectible books in the Stephen King “Rare Book Room” (Signed Limited Editions, Signed First Editions, Matching Volume Sets).

1 Comment on Stephen King European Signing Tour on the Horizon?