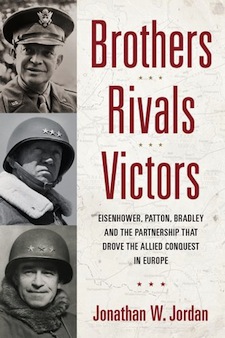 Award-winning author Jonathan Jordan will be making a special appearance this month to promote his new WWII history book, “Brothers, Rivals, Victors: Eisenhower, Patton, Bradley and the Partnership that Drove the Allied Conquest in Europe.”

Jordan is an attorney with King & Spalding LLP in Atlanta, the editor of the Library of Texas edition of “To the People of Texas,” and a contributing author to both “The Armchair Reader: The Amazing Book of World History” and “The Armchair Reader: World War II.” His book “Lone Star Navy” won the 2007 United States Maritime Literature Award. “Brothers, Rivals, Victors” will be released on April 5, 2011, and you can lock in your discount by pre-ordering your copy on Amazon today.

About the book
“The true story of the friendship-and rivalry-among the greatest American generals of World War II.”

“Brothers, Rivals, Victors” follows the fascinating friendships and rivalry of Supreme Allied Commander Dwight D. Eisenhower, General George S. Patton, and General Omar N. Bradley, who engineered the Allied Conquest that brought about the demise of Hitler’s hold over Europe. Jordan spent nearly two years researching unpublished interviews and diaries in preparation of the book which delves into the friendships of these three men which dated back decades prior to WWII, from their time together at West Point Military Academy. Adding an insider’s view are the firsthand accounts of generals, staff officers, secretaries, aides, politicians and wives.

“Brothers Rivals Victors is drawn from the candid accounts of its main characters, and strips away much of the public image of “Ike” (Eisenhower), the “G.I.’s General” (Bradley), and “Old Blood and Guts” (Patton) to reveal the men lurking beneath the legend.”