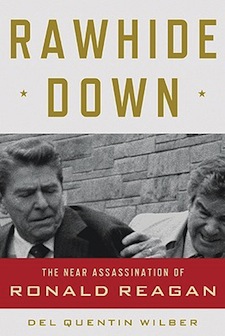 Washington Post journalist Del Quentin Wilber will be at the Carter Library & Museum at the end of April, where he’ll be giving a reading and book signing of his new book, “Rawhide Down: The Near Assassination of Ronald Reagan.”

Before assuming his post with The Washington Post, Wilber was a crime reporter for The Baltimore Sun. In 2001, his reporting on wrongdoing by Baltimore Police Chief Ed Norris led to the chief’s 2003 conviction on corruption charges and six month term in federal prison, as well as earning Wilber the 2004 Al Nakkula Award for excellence in police reporting. In 2002, Wilber covered the D.C. sniper shootings – coverage that led The Baltimore Sun to make the list of finalists for the Pulitzer Prize. Since 2006, Wilber has been The Washington Post’s national aviation writer.

Recently released on March 15, 2011, “Rawhide Down” is sure to be a page-turner you won’t want to miss. You can order the hardcover edition on Amazon.com.

About the book
“For the first time, a minute-by-minute account of the attempted assassination of Ronald Reagan”

It was March 30, 1981 when 40th U.S. President Ronald Reagan, after a landslide election and only 69 days into his term, exited the Washington Hilton Hotel in Washington, D.C. and was shot by would-be assassin John Hinckley, Jr. “Rawhide Down,” drawn from exclusive interviews and firsthand accounts including that of former White House Press Secretary James Brady, tells the harrowing story, from the gunfire to the ER and the days that followed; and what the American public did not know for years – just how close Mr. Reagan was do death that day.