Raquel V. Reyes was raised in oppositional cultures. Her early childhood was not unlike an I Love Lucy rerun with a heavy-accented, handsome Cuban father and a red-headed Southern mother whose smile brightened the room. A short story fan all her life, she has had stories published in several anthologies, including Mystery Most Theatrical, In the Midnight Hour, and Trouble No More. She lives in Miami, where she watches the waters for mermaids and leviathan. 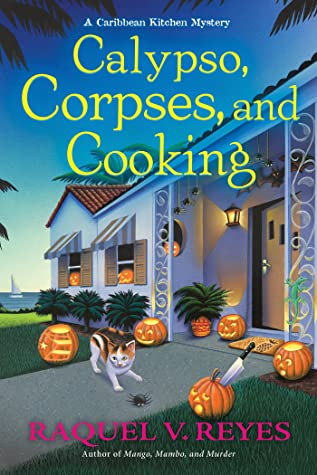 Fall festivities are underway in Coral Shores, Miami. Cuban-American cooking show star Miriam Quiñones-Smith wakes up to find a corpse in her front yard. The body by the fake tombstone is the woman that was kicked out of the school’s Fall Festival the day before.

Miriam’s luck does not improve. Her passive-aggressive mother-in-law puts her in charge of the Women’s Club annual gala. But this year, it’s not canapes and waltzes. Miriam and her girlfriends-squad opt for fun and flavor. They want to spice it up with Caribbean food trucks and a calypso band. While making plans at the country club, they hear a volatile argument between the new head chef and the club’s manager. Not long after, the chef swan dives to his death at the bottom of the grand staircase.

Was it an accident? Or was it Beverly, the sous chef, who is furious after being passed over for the job? Or maybe it was his ex-girlfriend, Anastasia?

Add two possible poisonings to the mix and Miriam is worried the food truck fun is going to be a major crash. As the clock ticks down and the body count goes up, Miriam’s life is put in jeopardy. Will she connect the dots or die in the deep freeze? Foodies and mystery lovers alike will savor the denouement as the truth is laid bare in this simmering stew of rage, retribution, and murder.