Jason Reynolds is a #1 New York Times bestselling author, a Newbery Award Honoree, a Printz Award Honoree, a two-time National Book Award finalist, a Kirkus Award winner, a Carnegie Medal winner, a two-time Walter Dean Myers Award winner, an NAACP Image Award Winner, and the recipient of multiple Coretta Scott King honors. He’s also the 2020–2021 National Ambassador for Young People’s Literature. His many books include All American Boys (cowritten with Brendan Kiely), When I Was the Greatest, The Boy in the Black Suit, Stamped, As Brave as You, For Every One, the Track series (Ghost, Patina, Sunny, and Lu), Look Both Ways, and Long Way Down, which received a Newbery Honor, a Printz Honor, and a Coretta Scott King Honor. He lives in Washington, DC. You can find his ramblings at JasonWritesBooks.com.

Jason Griffin created the artwork for My Name Is Jason. Mine Too, written by Jason Reynolds. He’s an artist and master collaborator, who has shown his art in major cities all over the world. his most recent projects include a commissioned mural for the children’s cancer wing at Montefiore Hospital in the Bronx, as well as a residency at the new contemporary art museum in Amsterdam, Het HEM. He currently creates in Queens, New York. 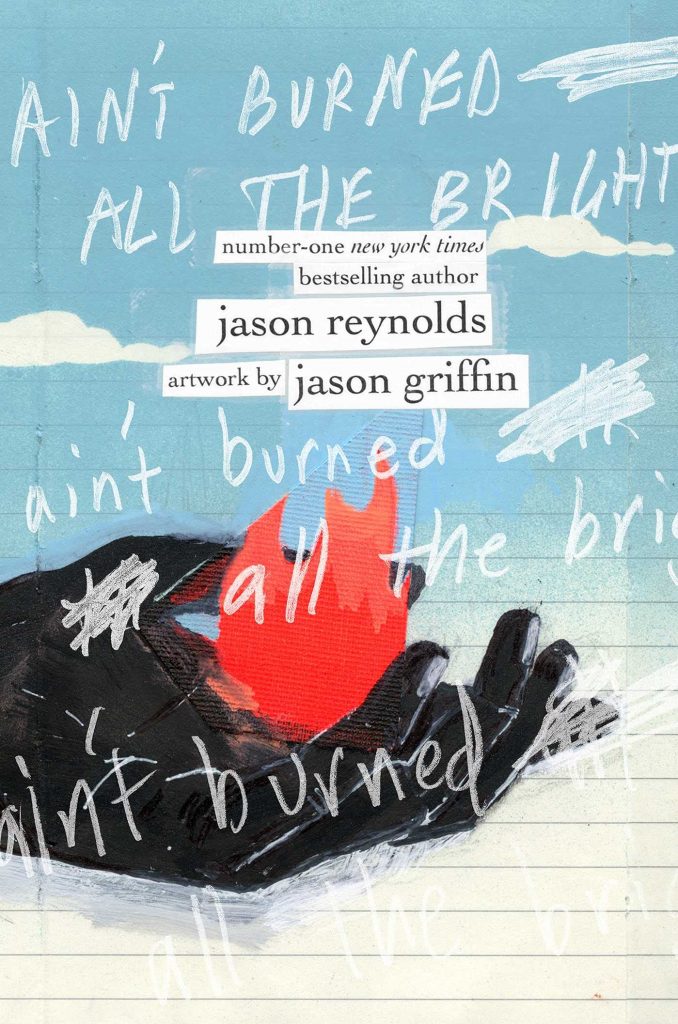 Prepare yourself for something unlike anything: A smash-up of art and text for teens that viscerally captures what it is to be Black. In America. Right Now. Written by #1 New York Times bestselling and award-winning author Jason Reynolds.

Jason Reynolds and his best bud, Jason Griffin had a mind-meld. And they decided to tackle it, in one fell swoop, in about ten sentences, and 300 pages of art, this piece, this contemplation-manifesto-fierce-vulnerable-gorgeous-terrifying-WhatIsWrongWithHumans-hope-filled-hopeful-searing-Eye-Poppingly-Illustrated-tender-heartbreaking-how-The-HECK-did-They-Come-UP-with-This project about oxygen. And all of the symbolism attached to that word, especially NOW.

And so for anyone who didn’t really know what it means to not be able to breathe, REALLY breathe, for generations, now you know. And those who already do, you’ll be nodding yep yep, that is exactly how it is.