VICTORIA “V. E.” SCHWAB is the #1 New York Times bestselling author of more than a dozen books, including The Invisible Life of Addie LaRue, the acclaimed Shades of Magic series, the Villains series, This Savage Song, and Our Dark Duet. Her work has received critical acclaim, been featured in the New York Times, Entertainment Weekly, Washington Post and more, been translated into more than a dozen languages, and has been optioned for television and film. When she’s not haunting Paris streets or trudging up English hillsides, she lives in Edinburgh, Scotland and is usually tucked in the corner of a coffee shop, dreaming up monsters. 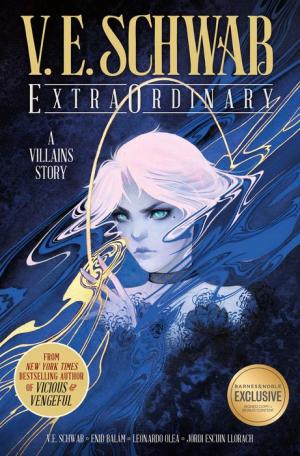 This Barnes & Noble Exclusive Edition includes an exclusive cover, exclusive interview with V.E. Schwab, bonus endpapers, and behind the scenes material with commentary. All copies will be signed by V.E. Schwab.

V.E. Schwab, the #1 New York Times bestselling author of The Invisible Life of Addie LaRue, launches her incredible world of super beings with this ALL-NEW dazzlingly illustrated graphic novel set in the five years between Vicious and Vengeful. A must for all Schwab fans everywhere!

This collection also features, for the first time ever in print, Schwab’s original 2013 text short story Warm Up, which is set in the Vicious universe.

Taking place in the years between VICIOUS and VENGEFUL, Extr”rdinary follows the tale of a teenage girl named Charlotte Tills who following a fatal bus crash, seemingly dies only to wake up to discover she has become an EO — a person with Extr”rdinary abilities. In Charlotte’s case, it’s the ability to see people’s deaths, but when she looks into her own future, sees her own murder at the hands of the self-proclaimed hero and notorious EO killer Eli Ever, who is currently in prison for the murder of Victor Vale. Refusing to accept her fate, Charlotte sets off to find—and change—her future—before it comes for her.

This graphic novel introduces Eli Ever, the antagonist at the heart of the Villains series.

Also includes for the first time ever in print, V.E. Schwab’s original text short story, Warm Up. Set in the Vicious universe and follows the story of a family man called David, who after surviving a deadly avalanche wakes up as an EO with the terrifying ability to create fire with his mind.