Join The Sopranos stars, Michael Imperioli and Steve Schirripa as they discuss “Woke Up This Morning: The Definitive Oral History of The Sopranos.”

Michael Imperioli is best known for his starring role as Christopher Moltisanti on The Sopranos, which earned him an Outstanding Supporting Actor Emmy Award. He also wrote five episodes of the show and was co-screenwriter of the film Summer of Sam, directed by Spike Lee. He has appeared in six of Lee’s films and has also acted in films by Martin Scorsese, Abel Ferrara, Walter Hill, Peter Jackson, and the Hughes Brothers. Most recently he starred in Regina King’s feature One Night in Miami. Imperioli is also the author of the critically acclaimed novel The Perfume Burned His Eyes, and the short story “YASIRI” in the anthology The Nicotine Chronicles, edited by Lee Child.

Steve Schirripa is well known for playing fan-favorite character Bobby Baccalieri on The Sopranos, and currently as Anthony Abetemarco on the long-running hit CBS series Blue Bloods. Steve’s impressive film and TV credits include Jersey Boys and Hereafter, both directed by Clint Eastwood, and the award-winning The Secret Life of the American Teenager, in which he was a series regular. Schirripa has also starred in a number of independent films including What Are the Odds, which won him Best Supporting Actor at the New York Independent Film Festival. A regular and favorite guest on TV talk shows, Steve became a special correspondent for the Today show and The Tonight Show, and is also the New York Times bestselling author of six books, including A Goomba’s Guide to Life and the young adult novel Nicky Deuce: Welcome to the Family, which was made into a film for Nickelodeon and starred several Sopranos alum. 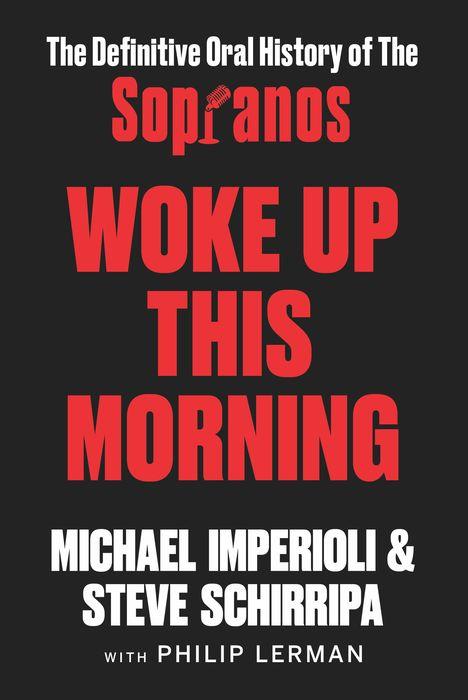 “Essential for fans, with a revelation on every page.” —Kirkus Reviews

“A spectacular tell-all…the ultimate book on The Sopranos, made by the people who lived it.” —Publishers Weekly

The definitive oral history of the landmark television series and streaming hit The Sopranos, packed with untold stories from behind the scenes and on the set. Stars Michael Imperioli and Steve Schirripa—whose Talking Sopranos podcast has become a sensational fan favorite—talk intimately with virtually everyone who has been involved with the show. And they’re ready to spill it all.

Who made the phone call that got HBO to launch The Sopranos? What’s the significance of all those eggs? And, what the hell ever happened to the Russian? Michael Imperioli, Steve Schirripa, and the entire cast and crew of The Sopranos have all the answers—and they’re revealing where all the bodies are buried.

Inspired by the incredibly successful Talking Sopranos podcast, The Sopranos stars Michael Imperioli (Christopher Moltisanti) and Steve Schirripa (Bobby Baccalieri) will finally reveal all the Soprano family secrets in a surprising, funny, and honest new book. Woke Up This Morning will be the definitive behind-the-scenes history of the groundbreaking HBO series that became a worldwide cultural phenomenon, ushered in a new Golden Age of Television, and to this day continues to be one of the most binged shows of all time.

Expanding on the podcast with exclusive interviews with the cast, crew, producers, writers, directors, and, of course, the series creator David Chase, Michael and Steve will tell all the incredible stories that The Sopranos fans have been waiting to hear for over twenty years. The book will cover the entire history of The Sopranos series from the original concept pitch and casting to the infamous cut to black—and answer many of the thousands of fan questions sent to the podcast, as well as dispel some widely propagated myths and reveal things no one outside the show would even know to ask.