Join American rapper, songwriter, entrepreneur, and founder of the Maybach Music Group, Rick Ross, for discussion on “The Perfect Day to Boss Up.”

Rick Ross is an American rapper, songwriter, entrepreneur and founder of the Maybach Music Group. All ten of his albums have landed in the top ten of the Billboard 200, including five number one debuts. He has received four Grammy Award nominations. He has worked closely with Jay-Z, Kanye West, Diddy, Drake, Lil Wayne and DJ Khaled, among many others. He lives in Atlanta, Georgia. Hurricanes is his first book. 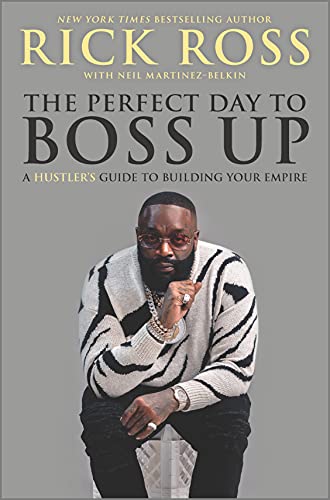 A captivating and inspiring guide to building an untouchable empire from mud to marble, no matter what obstacles stand in the way

Rick Ross is a hip-hop icon and a towering figure in the business world, but his path to success was not always easy. Despite adversity and setbacks, Ross held tight to his vision and never settled for anything less than greatness. Now, for the first time, he shares his secrets to success, offering his own life as a road map to readers looking to build their own empire. Along the way he reveals:

As Ross explains, “It doesn’t matter what’s going on. Even the most dire situation is just another opportunity to boss up.”Intimate, insightful and brimming with no-nonsense advice, The Perfect Time to Boss Up is the ideal book for hustlers everywhere.