Mary H.K. Choi is a writer for The New York Times, GQ, Wired, and The Atlantic. She has written comics for Marvel and DC, as well as a collection of essays called Oh, Never Mind. Her novels Emergency Contact and Permanent Record were New York Times bestsellers. She is the host of Hey, Cool Job!, a podcast about jobs, and Hey, Cool Life!, a podcast about mental health and creativity. Mary grew up in Hong Kong and Texas and now lives in New York. Follow her on Twitter @ChoitotheWorld. 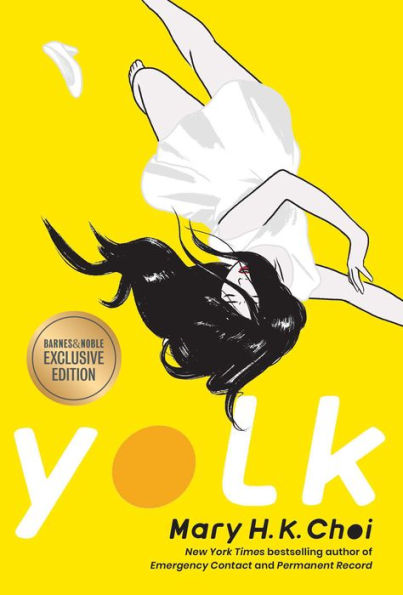 Wildly different sisters Jayne and June Baek have been avoiding each other for years. Then June is diagnosed with cancer and finds herself reaching out to her estranged little sister for support. Through screaming fights, calculated jabs and laugh-out-loud moments, we watch their relationship evolve into something resembling sisterhood. Emotional and multilayered, Yolk is a heartfelt story about the messy, complicated power of family in the face of the unknown.

This Barnes & Noble limited edition features an exclusive deleted scene that reveals a shocking secret. Fans of Yolk and Mary H.K. Choi won’t want to miss this!From New York Times bestselling author Mary H.K. Choi comes a funny and emotional story about two estranged sisters and how far they’ll go to save one of their lives—even if it means swapping identities.

Jayne and June Baek are nothing alike. June’s three years older, a classic first-born, know-it-all narc with a problematic finance job and an equally soulless apartment (according to Jayne). Jayne is an emotionally stunted, self-obsessed basket case who lives in squalor, has egregious taste in men, and needs to get to class and stop wasting Mom and Dad’s money (if you ask June). Once thick as thieves, these sisters who moved from Seoul to San Antonio to New York together now don’t want anything to do with each other.

That is, until June gets cancer. And Jayne becomes the only one who can help her.

Flung together by circumstance, housing woes, and family secrets, will the sisters learn more about each other than they’re willing to confront? And what if while helping June, Jayne has to confront the fact that maybe she’s sick, too?