Jocelyne Lamoureux Davidson and Monique Lamoureux-Morando share many things in common. They are identical twin sisters, born and raised in North Dakota. Starting at age 5, they began to play ice hockey with and against their four older brothers and on boys teams because there were no girls teams. Their competitive hockey careers started on the frozen pond in the back of their house but eventually extended to the world stage. Always playing on the same team, they won seven world championships, two Olympic silver medals, and ultimately, an Olympic gold medal in PyeongChang, South Korea in 2018. In the gold medal game, Monique scored the tying goal and Jocelyne scored the highlight reel shootout winning goal.

Monique and Jocelyne are much more than world-class athletes, though. They were raised to be difference makers. Before the 2017 world championships, the Lamoureux twins and their team put their gold medal hopes at risk by taking on their governing body by championing the cause of gender equity for themselves and for the next generation of female hockey players.

After the 2018 Olympics, they became mothers within six weeks of each other and now share a new bond of motherhood and a brand new motivation to continue their hockey careers.

Both women are dedicated to leveling the playing field for young girls and women, whether in sports, the workplace, or life. They both reside in Grand Forks, North Dakota, with their husbands and sons. 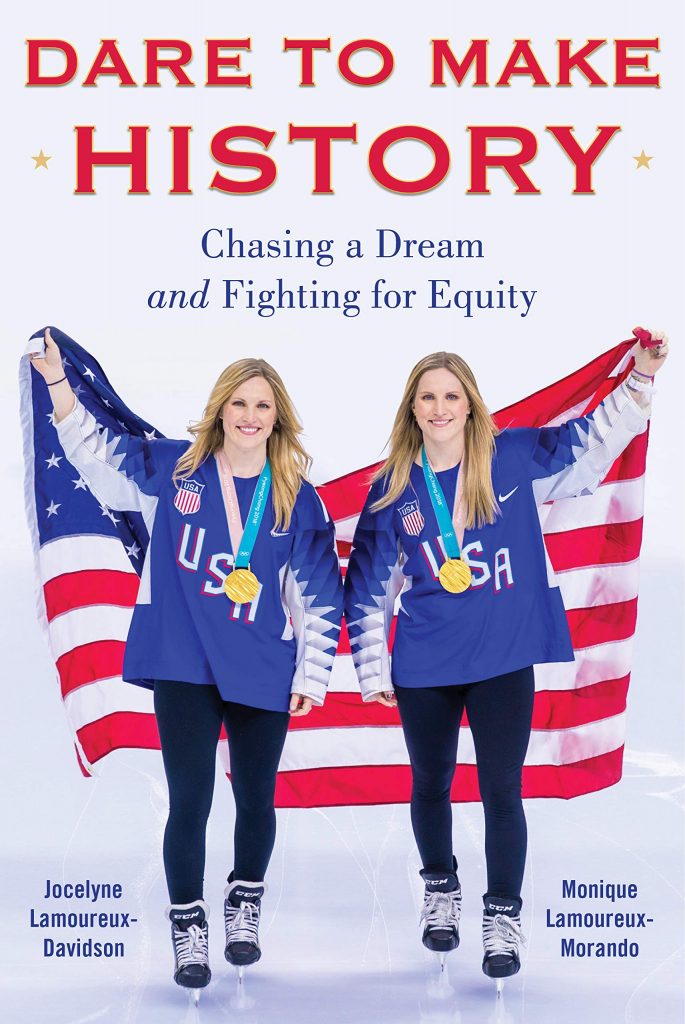 Dare to Make History is the story of two courageous and talented women who weren’t willing to accept anything less than being treated as equals. On their journey to a gold medal in women’s ice hockey, they became role models for generations before and after them.

Twins Jocelyne Lamoureux-Davidson and Monique Lamoureux-Morando started playing ice hockey with their four older brothers and their friends on a frozen pond next to their home in North Dakota. No girls hockey teams, no problem?they just played on boys teams.

They went on to win six World Championships and played in three Olympics, winning two silver medals and ultimately a gold medal in South Korea in 2018 for the USA Women’s National Team.

They did not allow roadblocks and discrimination deter them from taking on their governing body?USA Hockey?threatening to boycott the 2017 World Championships and jeopardizing their ability to compete in the 2018 Olympics unless their gender equity issues were addressed. The success of Monique, Jocelyne, and their team thrust them into the center of the struggle for gender equity, for women in hockey and in sports in general, as well as in society at large.

In Dare to Make History, the Lamoureux twins chronicle their journey to the pinnacle of their sport, their efforts along with almost 150 other hockey players to start a new professional women’s hockey league, their training to come back and make another national team after giving birth, their tireless efforts to advance the interests of disadvantaged communities in closing the digital divide, and their ongoing contributions as role models championing the dreams of future generations of girls in sports, education, and the workplace.

This is not a hockey book. It is not a girls book. It is a book about the importance of the fight for equity, particularly gender equity. It is the inspirational story of how two young women from a small town in North Dakota have dreamed big?had the courage to take on huge battles?and in the end how they have dared to make history.