Join a virtual event with internationally acclaimed photographer, Dana Gluckstein. Gluckstein is known for her powerful portraits of Indigenous Peoples around the world. She will discuss the new edition of “Dignity,” which provides urgency and a contemporary focus to the worldwide movement against racial injustice.

DANA GLUCKSTEIN has photographed iconic figures including Nelson Mandela, Mikhail Gorbachev, Desmond Tutu, and Muhammad Ali, as well as award-winning advertising campaigns for clients such as Apple and Toyota. Her portraits are held in the permanent collections of the Los Angeles County Museum of Art, the Santa Barbara Museum of Art, and the Smithsonian National Museum of African American History and Culture. Gluckstein’s international museum exhibition, DIGNITY: Tribes in Transition, presented at the United Nations in Geneva and has been touring European and U.S. museums since 2011. She addressed the World Economic Forum in Davos, Switzerland in 2013 on how art can impact the state of the world. DIGNITY is a three-time winner of the International Photography Awards. Gluckstein graduated from Stanford University, where she studied psychology, painting, and photography, and realized the power of images to shape consciousness. She lives in Los Angeles with her husband and has two children. 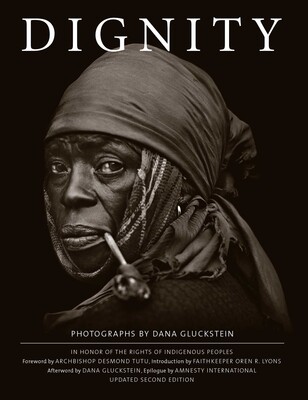 “The work of Dana Gluckstein helps us to truly see, not just appearances, but essences, to see as God sees us, not just the physical form, but also the luminous soul that shines through us.”

The updated edition of Dana Gluckstein’s iconic book, DIGNITY: In Honor of the Rights of Indigenous Peoples, provides urgency and a contemporary focus to the worldwide movement against racial injustice in which DIGNITY continues to play an important part. It includes new images of Native Americans and Moroccan Berbers as well as a new epilogue from Amnesty International, “Freedom from Violence” calling for the United States to take action against rape and assault of Native American and Alaskan Native women.

The first edition of DIGNITY, a three-time winner of the International Photography Awards, helped create a turning point for the Obama administration to adopt the UN Declaration on the Rights of Indigenous Peoples – a historic milestone – in association with Amnesty International for their 50th anniversary. The UN Declaration, whose full text is reproduced in DIGNITY, is the most comprehensive global statement of the measures every government must enact to ensure the survival and well-being of Indigenous Peoples. It has empowered a worldwide movement of Indigenous Peoples to assert stewardship of the land, air, and water.

Gluckstein spent three decades in the Americas, Africa, Asia, and the Pacific creating more than 100 black-and-white, duotone portraits that appear in DIGNITY and express the theme of “tribes in transition.” In the decade since DIGNITY first appeared, Gluckstein’s concerns over the treatment of Indigenous Peoples and her commitment to fighting on their behalf have only intensified. “DIGNITY is a call to action against racism,” states Gluckstein. In the book’s introduction, Native American Faithkeeper Oren R. Lyons reveals the roots of racism in the medieval Catholic Church and its Doctrine of Discovery that condemned Indigenous Peoples as subhuman to be treated like animals – the justification for their conquerors to steal land and enslave the inhabitants.

Gluckstein intends the new edition will be as consequential as the original, this time in spurring action on behalf of Native American and Alaskan women. More than one in three Native women will be raped at some point in their lives. Sexual assault is so common in these communities that many Native American and Alaska Native women don’t know any women who haven’t experienced the trauma. In addition, many perpetrators go unpunished. Gluckstein sees DIGNITY’s second edition as contributing to the current effort to insure these women receive adequate post-rape care mandated by the U.S. Tribal Law and Order Act – Sexual Assault Protocols and the UN Declaration. “I believe in the power of images to shift consciousness.”

“DIGNITY (the book and museum exhibition) is a multifaceted, many-layered project that captures the collision of modernity and tradition, globalization and indigeneity with grace, elegance, and profound humanity.”