Join Sandhya Menon and Jenna Evans Welch for a Facebook Live conversation about their new books 10 Things I Hate about Pinky and Love & Other Detours, their favorite summer reads that are perfect for every BookCation, and more!

Sandhya Menon is the New York Times bestselling author of When Dimple Met Rishi, Of Curses and Kisses, and many other novels that also feature lots of kissing, girl power, and swoony boys. Her books have been included in several cool places, including the Today show, Teen Vogue, NPR, BuzzFeed, and Seventeen. A full-time dog servant and part-time writer, she makes her home in the foggy mountains of Colorado. Visit her online at SandhyaMenon.com.

Jenna Evans Welch was the kind of insatiable child reader who had no choice but to grow up to become a writer. She is the New York Times bestselling author of Love & Gelato, Love & Luck, and Love & Olives. When she isn’t writing girl abroad stories, Jenna can be found chasing her children or making elaborate messes in the kitchen. She lives in Salt Lake City, Utah, with her husband and two young children. Visit her online at JennaEvansWelch.com. 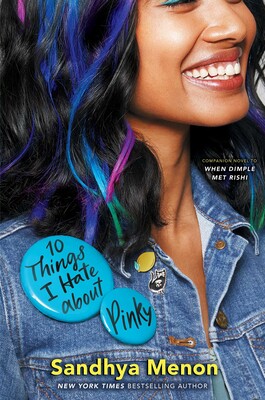 The delightful follow-up to When Dimple Met Rishi and There’s Something about Sweetie, which follows Ashish’s friends Pinky and Samir as they pretend to date in order to achieve their individual goals, to disastrous and hilarious results.

Pinky Kumar wears the social justice warrior badge with pride. From raccoon hospitals to persecuted rock stars, no cause is too esoteric for her to champion. But a teeny tiny part of her also really enjoys making her conservative, buttoned-up corporate lawyer parents cringe.

Samir Jha might have a few…quirks remaining from the time he had to take care of his sick mother, like the endless lists he makes in his planner and the way he schedules every minute of every day, but those are good things. They make life predictable and steady.

Pinky loves lazy summers at her parents’ Cape Cod lake house, but after listening to them harangue her about the poor decisions she’s made (a.k.a. boyfriends she’s had), she hatches a plan. Get her sorta-friend-sorta-enemy—who is a total Harvard-bound Mama’s boy—to pose as her perfect boyfriend for the summer.

When Samir’s internship falls through, leaving him with an unplanned summer, he gets a text from Pinky asking if he’ll be her fake boyfriend in exchange for a new internship. He jumps at the opportunity; Pinky’s a weirdo, but he can survive a summer with her if there’s light at the end of the tunnel.

As they bicker their way through lighthouses and butterfly habitats, sparks fly, and they both realize this will be a summer they’ll never forget. 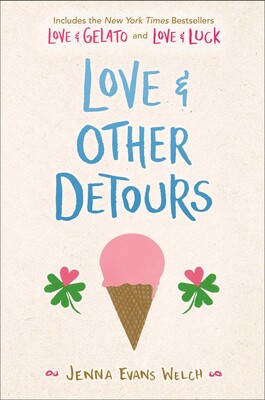 Set in the far-off and beautiful countrysides of Italy and Ireland, Jenna Evans Welch’s New York Times bestselling romances about life, love, and the true meaning behind the word family are now together in one charming package.

From Italy to Ireland, love can be found anywhere….

Travel to beautiful Tuscany with Lina who, still grieving her mother’s death, is forced to spend time with a father she never knew. But Lina isn’t in the mood for Italy’s famous sunshine or fairy-tale landscape. All Lina wants to do is go back home…until she’s given a journal that her mom had kept when she lived in Italy.

Suddenly, Lina is uncovering a world of magic and romance. It’s a world that inspires her, along with the ever so charming Ren, to follow in her mother’s footsteps and uncover a secret that has been kept for far too long—a secret that will change everything Lina thought to be true.

In the green hills of Ireland, Lina’s best friend Addie is just trying to make it through her aunt’s over-the-top destination wedding, hoping that she can stop thinking about the one thing she did that left her miserable and heartbroken—and threatens her future. But her brother, Ian, isn’t about to let her forget.

But when Addie discovers an unusual guidebook, Ireland for the Heartbroken, their travel plans change. Soon, Addie finds herself on a whirlwind tour of the Emerald Isle with Ian and his Irish-accented friend, Rowan. And as the trio journeys through magical forests and past countless castles, Addie hopes her guidebook will heal not only her broken heart, but also her shattered relationship with her brother.

No matter where Lina and Addie’s travels take them, one thing is true: romance and adventure are on the horizon.