Ramani Rangan will sign copies of “Gathering Moments in Time” in MA this month.

Ramani grew up in London during WWII. His Gujerati mother was a Pre-Bollywood actress and dancer and his South African Tamil father was a singer. Both were subscripted to entertain troops throughout the UK. This set the tone for Ramani’s lifelong involvement in the arts. He worked first in television and later in theater in London and Denmark, in lighting, prop design and management. He founded an Arts and Yoga center in Copenhagen and Christiania Free State, Denmark. He has owned and operated an organic baked goods company, designed jewelry, produced a radio show, taught meditation and yoga, worked as an intuitive counselor, written a screenplay, painted prolifically and found multiple creative ways to earn a living. He has traveled extensively and has lived in New Mexico, on Crete, in Costa Rica and currently lives in Gloucester, MA. He is a husband, father, grandfather and a deeply concerned global citizen. 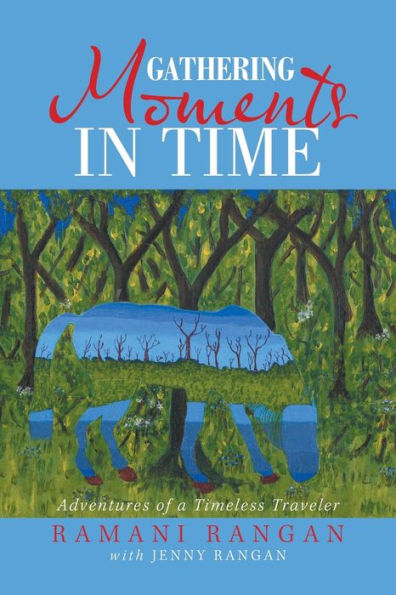 These are the memoirs of a British-born East Indian, spanning from 1941 war-torn London to current times. Through his creativity, resourcefulness, and perseverance, the author was able to overcome the obstacles of poverty, prejudice, alcoholism, violence, and the loss of his sister at an early age and transpose circumstance into revelation. This is the story of the fascinating characters and inspiring ordinary and extraordinary experiences that shaped his life, as told through the voice of insight, wit, empathy, and humor. Join the author in the Royal Theater in Copenhagen, resisting Franco on Formentera, Spain; escaping a drug cartel in Canada; being kidnapped in Jamaica; experiencing a metaphysical transformation in New Mexico and Mexico; and seeking spiritual roots in India. Travel through time and relationships on a journey of passion, suspense, adventure, and deep reflection to find the magic that is revealed through this and every life story.

This book also includes paintings in black and white by the author.