Shelby Steele is signing copies of “A Dream Deferred” in MA next month.

Shelby Steele is a research fellow at the Hoover Institution and Stanford University, and is a contributing editor at Harper‘s magazine. His many prizes and honors include the National Book Critics Circle Award, an Emmy Award, a Writers Guild Award, and the National Humanities Medal. 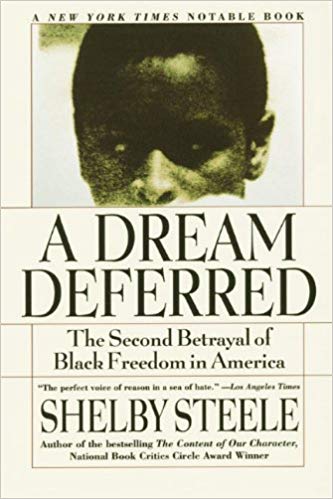 From the author of the award-winning bestseller The Content of Our Character comes a new essay collection that tells the untold story behind the polarized racial politics in America today. In A Dream Deferred Shelby Steele argues that a second betrayal of black freedom in the United States–the first one being segregation–emerged from the civil rights era when the country was overtaken by a powerful impulse to redeem itself from racial shame. According to Steele,1960s liberalism had as its first and all-consuming goal the expiation of America guilt rather than the careful development of true equality between the races. This “culture of preference” betrayed America’s best principles in order to give whites and America institutions an iconography of racial virtue they could use against the stigma of racial shame. In four densely argued essays, Steele takes on the familiar questions of affirmative action, multiculturalism, diversity, Afro-centrism, group preferences, victimization–and what he deems to be the atavistic powers of race, ethnicity, and gender, the original causes of oppression. A Dream Deferred is an honest, courageous look at the perplexing dilemma of race and democracy in the United States–and what we might do to resolve it.