Melinda Hudson is signing her book, “The Common Denominator is Unforgiveness: Process to Forgiveness” in NC next month.

MELINDA HUDSON has been a health care professional for over 30 years. She was one of six nurse consultants hired in the United States to begin the Home Care Division of Hill-Rom and market durable medical equipment, DME. From the time Melinda started working with Hill-Rom, she excelled in her role as a consultant and became the national sales trainer in her first year with Hill-Rom. She spent eight successful years with Hill-Rom before joining Roche Pharmaceutical to launch several outstanding products. While working with Roche, she promoted many great products like Rocephin, EC Naprosyn, Tamiflu, and Cipro.

Melinda will not hesitate to stand up for what she believes is best for patients and has worked diligently with senators and governors in North Carolina to see changes in Medicare regulations, as well as Medicaid reimbursement for DME. Melinda has a passion for helping others, and it is evident in the work she does.

Melinda graduated with her Master’s degree in nursing education from the University of Phoenix. She worked as a nursing instructor part-time for five years. Melinda stated her greatest desire as an educator was to connect with the students and inspire them to believe in themselves and follow their dreams.

Melinda is the daughter of Peggy and Stanley Peaden. She is married to Sam who served in the air force for eight years and has been a commercial pilot for twenty-five years. She said she has always been jealous of his “office space.” Melinda is the mother of Brooke Hudson Taunton and Blake Hudson, and the stepmother to Sammy and Corey Pierson, who joined the family over twelve years ago. Melinda is called Nina by her precious grandson Camden. When they are together, they sing, read, write, and make all kinds of things out of Playdough. Melinda has two fur babies, Prince, and Roxie who are always by her side. 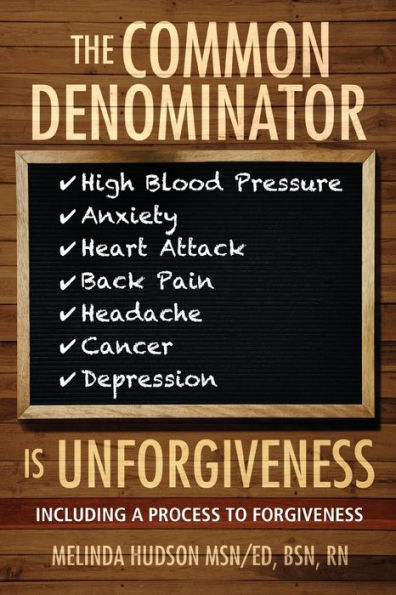 When you think about forgiving do you associate it with religion? If so, you are among the majority of people. Even individuals that do not have a religious affiliation, express they associate forgiveness with religion.

Approximately 30 years ago research scientist had a flux of groundbreaking discoveries concerning the connection between our mind and body. Studies proved that thoughts affect our emotions, and emotions affect our bodies.

Here’s an example of how your mind can affect your body. Imagine you’re at work and you have a disagreement with your co-worker regarding the next step on a large project that is your responsibility. Your co-worker gets very defensive about how he feels and suddenly begins to make comments about you that were not true. You walked out of his office feeling, angry, hurt, and disappointed. Once you were in your office you noticed your heart was beating faster than usual and your breathing had increased. You were starting to get a headache as well. It’s clear your feelings of anger and hurt affected your body.

Here’s another example that’s more intense. After working hard one morning, your boss decides to give you the afternoon off. You were excited because your spouse works the night shift and you don’t get to spend a lot of time together. As you walk in the house, you notice some shoes that didn’t look familiar. You open the bedroom door and find your spouse in your bed with someone else. How would you feel? Maybe furious, hurt, outraged, shocked, etc., you never thought your spouse would do something like that. What type of physical symptoms do you think you may feel? Increased heart rate, An increase in your heart rate and breathing, light-headed, sweaty, nauseated, just to mention a few symptoms.

From the example above, Do you believe it’s important to forgive your spouse? What do you think happens if you do not forgive the person who hurts you? The negative memory is stored in your subconscious mind just like other memories. As time goes by you notice you don’t think of the event much, you’ve been staying busy with work and friends. It may appear that time is healing your wounds and at some point, it will be forgotten. However, this is not what happens. It may be hard for you to believe right now, but unforgiveness over time will make you sick. I will explain precisely what happens in your body when you don’t forgive that causes you to slowly become ill.

When we go through emotional trauma, we have the choice to forgive or not to forgive. Are you willing to forgive? Do you know how to forgive? Are you aware of the cost of unforgiveness?

You will find the answers to these questions and many more in this book. I hope my journey of forgiveness will inspire you to be forgiving so you can obtain the benefits of living a life of forgiveness.