Local sportswriters, Sam Carchidi and Wayne Fish will be signing their new book, “The Big 50: Philadelphia Flyers” in PA this month.

Sam Carchidi has covered Sports for the Philadelphia Inquirer for more than forty years. In addition to working for the Inquirer, Sam has written for Athlon magazine, Baseball America, and the Scouting Report. He is the author of Miracle in the Making: The Adam Taliaferro Story, Bill Campbell: The Voice of Philadelphia Sports, and the co-author of If These Walls Could Talk: Philadelphia Flyers, with Lou Nolan.

Wayne Fish is the founder and editor of FlyingFishHockey.com. He has been covering the Philadelphia Flyers for the Bucks County Courier Times since 1976. In addition, he has been a regular contributing writer for The Hockey News for three decades and is a correspondent for New York Hockey Journal. In 2016, he won the Keystone Press Award for his story on the passing of Flyers founder and owner Ed Snider. 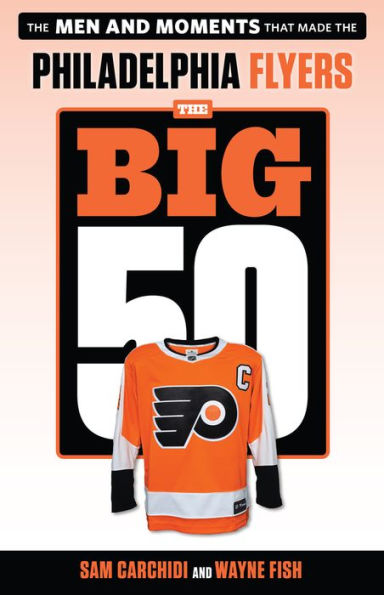 The Big 50: Philadelphia Flyers is a lively, comprehensive look at the 50 men and moments that made the Flyers the Flyers. Experienced sportswriters Sam Carchidi and Wayne Fish recount the living history of the franchise, counting down from No. 50 to No. 1. This collection brilliantly brings to life the team’s remarkable story, from its growing pains as an expansion team to the Broadstreet Bullies era, to more recent stars like captain Claude Giroux.