Alyssa Milano will sign copies of “Project Middle School” in NJ next month.

Actress and activist Alyssa Milano has spent almost her entire life in the public eye. A famous child actor, she has continued to work throughout her adulthood in both television and film, most notably starring in the wildly popular television series Who’s the Boss? and Charmed. Alyssa is also a lifelong activist and is passionate about fighting for human rights around the world. In 2003, UNICEF invited Alyssa to become a National Ambassador in recognition of her charitable work on behalf of children. Ever since then, Alyssa has been a champion of children’s rights, working closely with UNICEF to raise money and awareness and provide aid to the children who need it most all over the world. Alyssa also speaks to kids in schools around the country about the importance of voting and teaches them how to fill out a ballot because she believes it’s never too early to be civic-minded. Most recently, Alyssa is known for popularizing the #MeToo hashtag on Twitter, sparking the massive viral movement. She was named one of the 2017 Persons of the Year in Time magazine alongside other prestigious activists. She lives in Los Angeles with her husband and two kids. 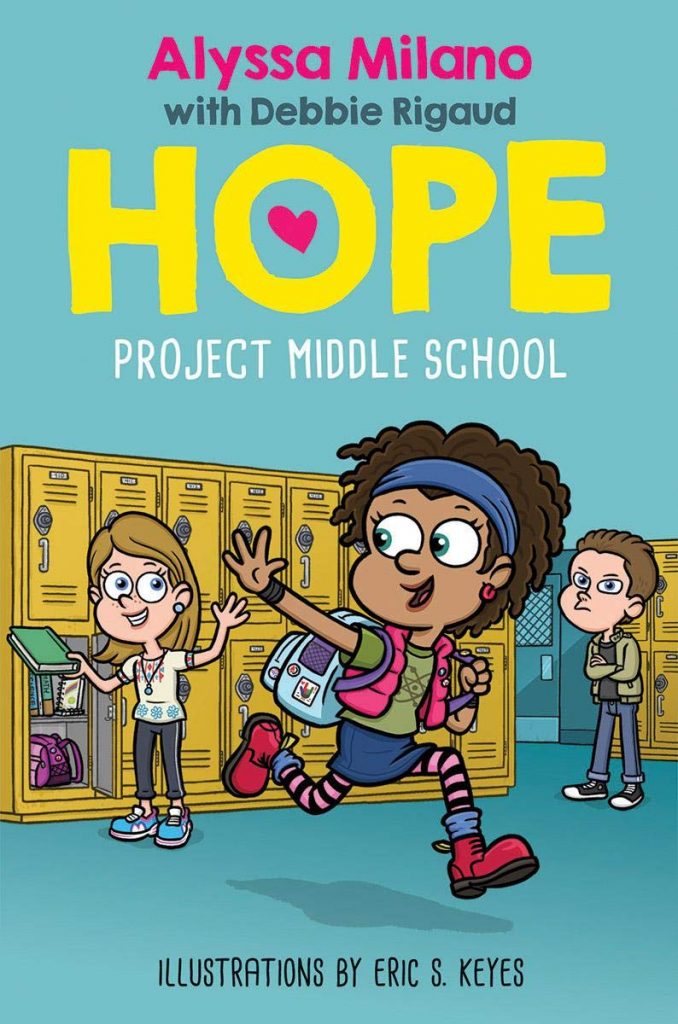 Hope is eleven years old, and she wants to be an astrophysicist. She loves swimming, Galaxy Girl comic books, her best friend Sam, and her two rescue dogs.

Hope believes it’s always a good day to champion a cause, defend an underdog, and save the future. And most of all, she believes in dreaming big. That’s why she’s enrolled in all of the advanced classes at her new middle school. She’s smart and confident in her abilities. But though Hope seems super strong on the outside, there’s another side of her, too. She’s just a regular girl trying to survive middle school.

It’s the beginning of sixth grade, and Hope’s BFF quickly meets a new group of friends in her classes. Hope doesn’t know how to handle it. She and Sam have always been inseparable! Things don’t go as well for Hope. She embarrasses herself in front of her whole class, and then she gets off on the wrong foot with her new classmate, Camila.

Even science club doesn’t go as planned. None of the boys in the club will listen to the girls’ ideas, and Hope and Camila get stuck doing the boring part of their science project, even though it was their idea.

But Hope is determined to prove herself to the boys — even if it means doing a lot of extra work on her own. She knows that sometimes changing the world starts small. So now Hope has a mission! Can she turn the science club into a place that’s welcoming for everyone — and make some new friends along the way?

Hope’s relatability, kindness, empathy, and can-do attitude will inspire a generation of do-gooders. This new series is a response to the very palpable feeling that not only can young people save the world — they will!