Signed First Editions of The Institute and Full Throttle

If you are not able to attend this event to get a signed book, we will be making a few available for sale. Please enter your email below to get on the waiting list. Each signed book will be made available on a “first come, first served” basis. 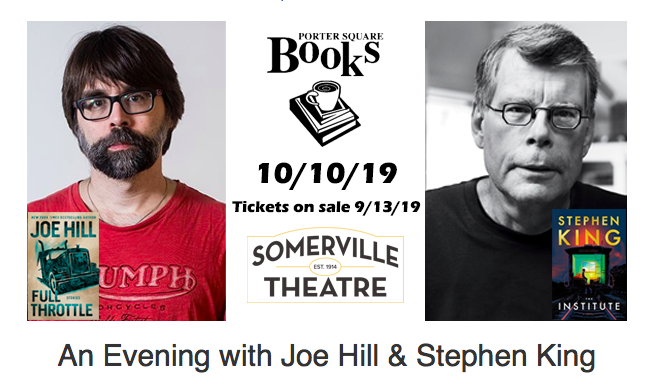 Stephen King and Joe Hill will be making a joint appearance in MA this October to discuss both The Institute and  Full Throttle.

This is a ticketed event – click here for the details.

From #1 New York Times bestselling author Stephen King, the most riveting and unforgettable story of kids confronting evil since It—publishing just as the second part of It, the movie, lands in theaters.

In the middle of the night, in a house on a quiet street in suburban Minneapolis, intruders silently murder Luke Ellis’s parents and load him into a black SUV. The operation takes less than two minutes. Luke will wake up at The Institute, in a room that looks just like his own, except there’s no window. And outside his door are other doors, behind which are other kids with special talents—telekinesis and telepathy—who got to this place the same way Luke did: Kalisha, Nick, George, Iris, and ten-year-old Avery Dixon. They are all in Front Half. Others, Luke learns, graduated to Back Half, “like the roach motel,” Kalisha says. “You check in, but you don’t check out.”

In this most sinister of institutions, the director, Mrs. Sigsby, and her staff are ruthlessly dedicated to extracting from these children the force of their extranormal gifts. There are no scruples here. If you go along, you get tokens for the vending machines. If you don’t, punishment is brutal. As each new victim disappears to Back Half, Luke becomes more and more desperate to get out and get help. But no one has ever escaped from the Institute.

As psychically terrifying as Firestarter, and with the spectacular kid power of It, The Institute is Stephen King’s gut-wrenchingly dramatic story of good vs. evil in a world where the good guys don’t always win.

In this masterful collection of short fiction, Joe Hill dissects timeless human struggles in thirteen relentless tales of supernatural suspense, including “In The Tall Grass,” one of two stories co-written with Stephen King, basis for the terrifying feature film from Netflix.

A little door that opens to a world of fairy tale wonders becomes the blood-drenched stomping ground for a gang of hunters in “Faun.” A grief-stricken librarian climbs behind the wheel of an antique Bookmobile to deliver fresh reads to the dead in “Late Returns.” In “By the Silver Water of Lake Champlain,” soon to be an episode on Shudder TV’s Creepshow, two young friends stumble on the corpse of a plesiosaur at the water’s edge, a discovery that forces them to confront the inescapable truth of their own mortality . . . and other horrors that lurk in the water’s shivery depths. And tension shimmers in the sweltering heat of the Nevada desert as a faceless trucker finds himself caught in a sinister dance with a tribe of motorcycle outlaws in “Throttle,” co-written with Stephen King.

Replete with shocking chillers, including two previously unpublished stories written expressly for this volume (“Mums” and “Late Returns”) and another appearing in print for the first time (“Dark Carousel”), Full Throttle is a darkly imagined odyssey through the complexities of the human psyche. Hypnotic and disquieting, it mines our tormented secrets, hidden vulnerabilities, and basest fears, and demonstrates this exceptional talent at his very best.