Sherry Ostroff is signing copies of “Caledonia” in PA next month.

Sherry V. Ostroff earned a Bachelor’s in education from TempleUniversity and a Master’s in history from Millersville University. Shetaught all levels: elementary, secondary and college. Ostroff happilydevotes time to her writing, her family, and traveling around the world. She lives with her high school sweetheart in Lancaster County,Pennsylvania.

The author’s first book is THE LUCKY ONE. It isbased on her mother’s memoir detailing her frightening escape fromEastern Europe in the 1920’s. It is available as an ebook and paperback. THE LUCKY ONE placed in the top 20 Indie Book category for 2017. Hersecond book, CALEDONIA, is a historical novel. It is aninter-generational tale about two strong female characters separated bythree centuries. Modern day Hanna keeps uncovering mysterious cluesabout her Jewish ancestor Anna. Set in Scotland and Central America thestory includes romance, adventure and mystery. Visit the author’swebsite at sherryvostroff.com. 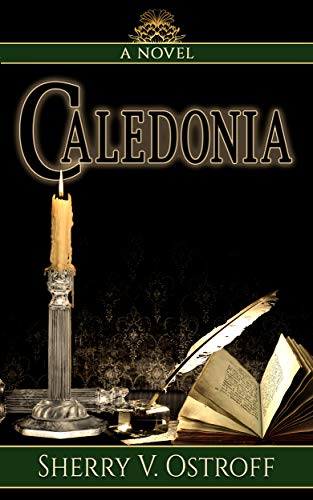 Anna Issac’s choices are bleak. Suicide is more appealing than marrying the revolting Frenchman her spiteful brother has chosen for her. The only other option is to beg a man she barely knows, a Highlander, to help her run away. Escape would be a challenge for any fifteen-year-old, but it is particularly difficult for a Jewess living in 17th century Scotland. Anna’s tale would have remained a secret, except three centuries later the death of Hanna Duncan’s father on 9/11 unleashes a chain of events that leads her to an ancient key with a peculiar etching. Once deciphered, the clue points Hanna toward a safe deposit box in Edinburgh where Hanna uncovers Anna’s role in the creation of Scotland’s only colony. Caledonia promised to be the trading hub of the New World, but starvation, ship’s fever, and incompetent leadership dogged the 1,200 colonists from the moment they left Scotland. More than half would be buried at sea or in the colony’s muddy cemetery, and Anna would not be immune from the dreadful conditions. The outpost was deserted in less than a year.CALEDONIA is a tale of these two strong women separated by time but bound by mysterious circumstances. 21st century Hanna keeps uncovering evidence linking her to 17th century Anna. Both women experience romance, adventure, and tragedy as the reader witnesses them becoming more and more connected.