Signed First Edition of Supreme Glamour – If you are not able to attend this event above and would still like a signed copy of Supreme Glamour, personally signed by Mary Wilson, enter your email below and we will notify you when one becomes available:

Mary Wilson, member of The Supremes, is signing copies of “Supreme Glamour” in CA next month.

Reflections on Supremes fashion and history

– “Even before they were The Supremes, Diana Ross, Mary Wilson, and Florence Ballard were passionate fashionistas. They cruised upscale stores for ideas. They sketched designs, hunted fabric sales, and sewed their fab dresses at home. Then the three teenagers signed with Motown and took off. They became music’s biggest girl group. Now their glittering gowns were designer, and astounding. Their style was flawless. And Supreme Glamour, a celebration by Wilson and co-author Mark Bego, recaptures it all”….read full article on Daily News

Mary Wilson is one of the founding members of The Supremes. 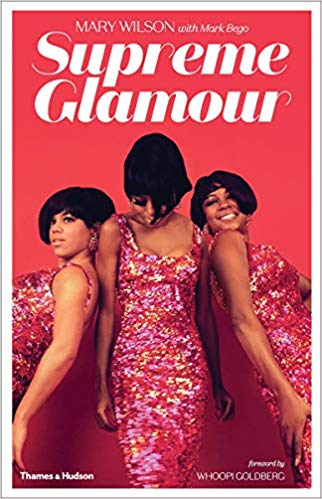 Sumptuously illustrated, engaging, and insightful, Mary Wilson’s book charts the glittering story of The Supremes, as it showcases their glamorous and iconic ensembles.

As Motown’s leading act in the 1960s, The Supremes became synonymous with glamorous, elegant, coordinated ensembles. Supreme Glamour presents founding member Mary Wilson’s unparalleled collection, showcasing thirty-two of the group’s most eye-catching gowns, meticulously reassembled and photographed on the Grammy Museum stage. Detailed captions accompany each photograph, providing information about the design, fabric, and embellishments of each ensemble, as well as the occasion on which each was first worn.

In addition to the fashion history of The Supremes, the book chronicles the evolution of the group and celebrates the cultural icons they became. Engaging and insightful narrative text by Mary Wilson and close personal friend Mark Bego is interspersed among hundreds of archival photos. Packed with anecdotes and insights, Mary Wilson tells the complete story of The Supremes, both on- and off- stage, from their founding in Detroit in 1959 as The Primettes to their 1964 breakthrough hit, “Where Did Our Love Go,” and from the departure of Diana Ross to The Supremes’ disco hits of the 1970s. Supreme Glamour builds a complete picture of the charm, sophistication, and magic of The Supremes.