Mychea signs copies of “Someone’s Gonna Get It” in OH next month.

A native of the Metropolitan of Washington, DC, Mychea holds a Bachelor of Science in Graphic Design and is the author of 11 fiction novels and 2 eBooks, resulting in over half a million book sales. She is also the writer and producer of 3 stage plays and a web series that were filmed in Maryland and DC.

Mychea has launched From Ground Zero to Published, an online writing and publishing course to help individuals looking to self-publish books or publish the traditional way. Currently viewable on YouTube on Channel Mychea.

Most recently Mychea has ventured into public speaking and hosting seminars on publishing in today’s market.

Mychea is currently working on a web series that will debut in winter 2018, a film and stage plays to be debuted in 2019.

In her spare time Mychea loves to volunteer at men and women shelter’s, read romance, suspense and mystery novels, draw, plan events and hang out with friends. 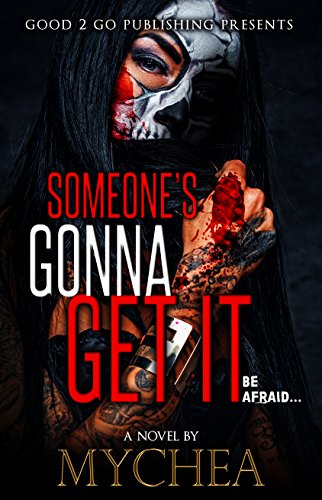 A picture perfect landscape, where dreams come to die…

Meet Kara, a young detective on a dubious mission to locate the person that assassinated her father when she was a child. No child should witness a parent violently murdered before their eyes. This horrific tragedy she suffered has caused Kara to become permanently scarred and emotionally distant as an adult. The psychological issues she now has run deep. Fresh off the heels of her second broken engagement Kara knows that if she doesn’t unravel and solve the events that lead to her father’s death and locate his murderer that she will never be able to live a happy, functional life. She feels a sense of urgency upon her. A feeling of being hunted has entered her life, as if someone is watching every move and she has the eerie feeling that her time is running out.

I envision hurting people. The type of hurt that makes them wish I would kill; end my torture of them sooner. Watching them squirm, I love as the pain becomes so excruciating it leaves their body no other option. It thrills me. I enjoy the ones that fight back, specifically once the bleeding begins. Their blood oozing through every hole that I have strategically punctured into their body. This excites me. Almost as much as watching the pretty detective grow into a woman. She had been a little girl when I last saw her and as much as it pained me to keep her alive, even I couldn’t stomach the thought of killing a child. But, oh the sweet joy of time. She is all grown up now and ripe for a killing. My patient wait is over. Her time is up.

SOMEONE’S GONNA GET IT is a suspenseful, nail biting, story of hatred, revenge and murder. Always remember to kiss your loved one’s good-bye…