Don Carswell will be signing copies of “Look at the Sun” in PA next month.

Don Carswell has hiked the Himalayas, canoed the Amazon, been caught up in a coup in Honduras, walked across England, and set up his tent everywhere from Iceland to Tierra del Fuego. He grew up writing short stories and articles for his school newspaper and dreaming of traveling the world. Beginning with a backpacking trip through Europe at age seventeen, Don has traveled extensively through 89 countries and all 50 states. He has spent a great deal of time exploring Latin America, including a two-week solo bus journey across Central America that became the inspiration for “Look at the Sun”. Don shuns escorted tours and travels independently, giving him a unique street-level perspective of foreign cultures.

Don holds a BS in chemistry from Penn State University and an MBA from the University of Strathclyde in Glasgow, Scotland. While his career has focused on international sales, he is also a freelance journalist and travel writer, with his work frequently appearing in such publications as the “Sparta Independent”, the “New Jersey Herald” and “International Traveller,” an Australian magazine. “Look at the Sun” is his first novel. Don currently lives in Sussex County, NJ. 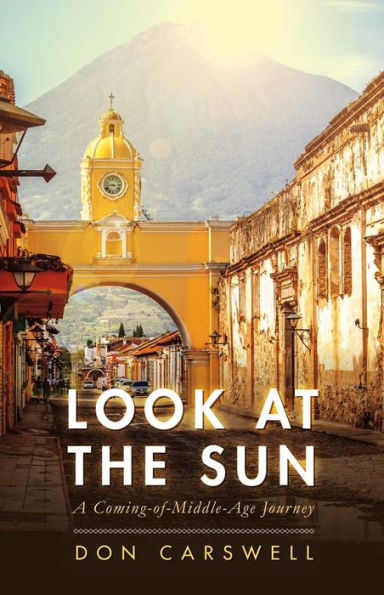 “Look at the Sun” may well be the world’s first coming-of-middle-age novel. It is a subtle, yet insightful, examination of the boundaries of free thought. On the surface it chronicles the hero’s contemporaneous parallel journeys- his poignant passage through a difficult chapter of life and his breathtaking trek through Central America, a dreamy but dangerous world of beauty and color. On a deeper level it is a thought-provoking exploration of what it truly means to think for oneself, if, in fact, that is ever really possible.

“Look at the Sun” pursues its probing inquiry through the introspective journey of Doug Roth, a middle-class family man and frustrated IT Director. Profoundly bored and peering across the yawning chasm of a recalcitrant midlife crisis, Doug suddenly concludes that the best way to overcome his growing depression is to undertake a bumpy bus trip alone, along the scoliotic spine of Central America. A chance encounter with an erstwhile hippie and ‘closet intellectual’ leads him down a sinuous road of friendship, betrayal and paranoia and finally to the precipice of his mortality. In spite of the weighty subject matter, “Look at the Sun” endeavors to maintain an upbeat, positive spin.

Though the story is fictional, many of the events in “Look at the Sun” are based on the real experiences of the author during his many years of travel around the world.