James Worthy, Lakers legend, will be signing copies of “100 Things Lakers Fans Should Know & Do Before They Die” in CA next month.

James Ager Worthy (born February 27, 1961) is an American former professional basketball player who is currently a commentator, television host, and analyst. Named one of the 50 Greatest Players in NBA History, “Big Game James” was a seven-time NBA All-Star, three-time NBA champion, and the 1988 NBA Finals MVP with the Los Angeles Lakers in the National Basketball Association (NBA).

A standout at the University of North Carolina, the 6 ft 9 in (2.06 m) small forward shared College Player of the Year honors en route to leading the Tar Heels to the 1982 NCAA Championship. Named the tournament’s Most Outstanding Player, he was No. 1 pick of the 1982 NBA draft of the defending NBA champion Lakers. 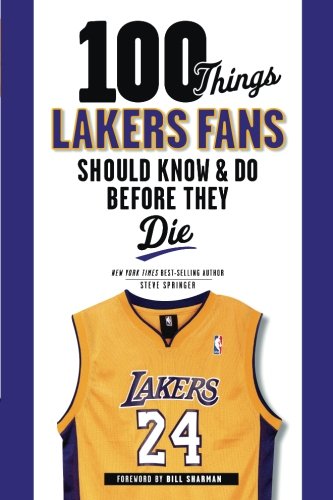 This is the ultimate resource guide for true fans of the Los Angeles Lakers. Most fans have taken in a game or two at the Staples Center, have seen highlights of a young Magic Johnson, and remember the epic battles with the Celtics in the 1980s. But only real fans know how the Lakers acquired Hot Rod Hundley, which hobby fascinated both Chick Hearn and Elgin Baylor, or the best place to grab a bite in Los Angeles before the game. Every essential piece of Lakers knowledge and trivia, as well as must-do activities, is ranked from 1 to 100, providing an entertaining and easy-to-follow checklist for those on their way to Laker fan superstardom.