This suspenseful sequel to “One More Last Dance” follows Peck Finch’s search for his mother after leaving home at the age of nine, and the struggles of his friend Gabe, who is simultaneously facing a second-degree murder charge. Set within the rich and storied culture of Louisiana, this tale of self-discovery explores important questions about the meaning of love, friendship, family and more.

Antil’s books are brimming with authenticity gleaned from his personal studies of the Cajun dialect and consultations with legendary New Orleans chef Leah Chase about Creole culture as well as counselor Lindsay Jay Jeffrey of Orleans Parish Criminal District Court who helped him breathe life into the book’s intense courtroom scenes.

“I WOKE A 94-YEAR-OLD FRIEND FROM HIS HOSPICE DEATHBED BY TELLING HIM, ‘DON, WHAT THE HELL ARE YOU DOING IN BED? YOU PROMISED ME A BOOK ABOUT YOUR WWII CAPTURE. I HAVEN’T SEEN A PAGE.’ HE WOKE, WAS SENT HOME, LIVED ALMOST TWO MORE YEARS AND WROTE THE BOOK. ANOTHER FRIEND, EDDIE, TAUGHT ME JAZZ. COMBINED, THEY ARE MY PROTAGONIST, GABE. THE CHARACTER PECK, I DRAW FROM ME.” JMA

JEROME MARK ANTIL writes in several genres. He has been called a “greatest generation’s Mark Twain,” a “write what you know Ernest Hemingway,” and “a sensitive Henry Wadsworth Longfellow.” It’s been said his work reads like a Norman Rockwell painting. Among his writing accomplishments, several titles in his The Pompey Hollow Book Club historical fiction series about growing up in the shadows of WWII have been honored. An ‘Authors and Writers’ Book of the Year Award and ‘Writer of the Year’ at Syracuse University for The Pompey Hollow Book Club novel; Hemingway, Three Angels, and Me, won SILVER in the UK as second-best novel. Foreword’s Book of the Year Finalist for The Book of Charlie – historical fiction and The Long Stem is in the Lobby – nonfiction humor. Library Journal selected Hemingway, Three Angels and Me for best reads during Black History Month.

Before picking up the pen, Antil spent his professional career writing and marketing for the business world. In this role, he lectured at universities – Cornell, St. Edward’s, and Southern Methodist. His inspirations have been John Steinbeck, Mark Twain, and Ernest Hemingway. 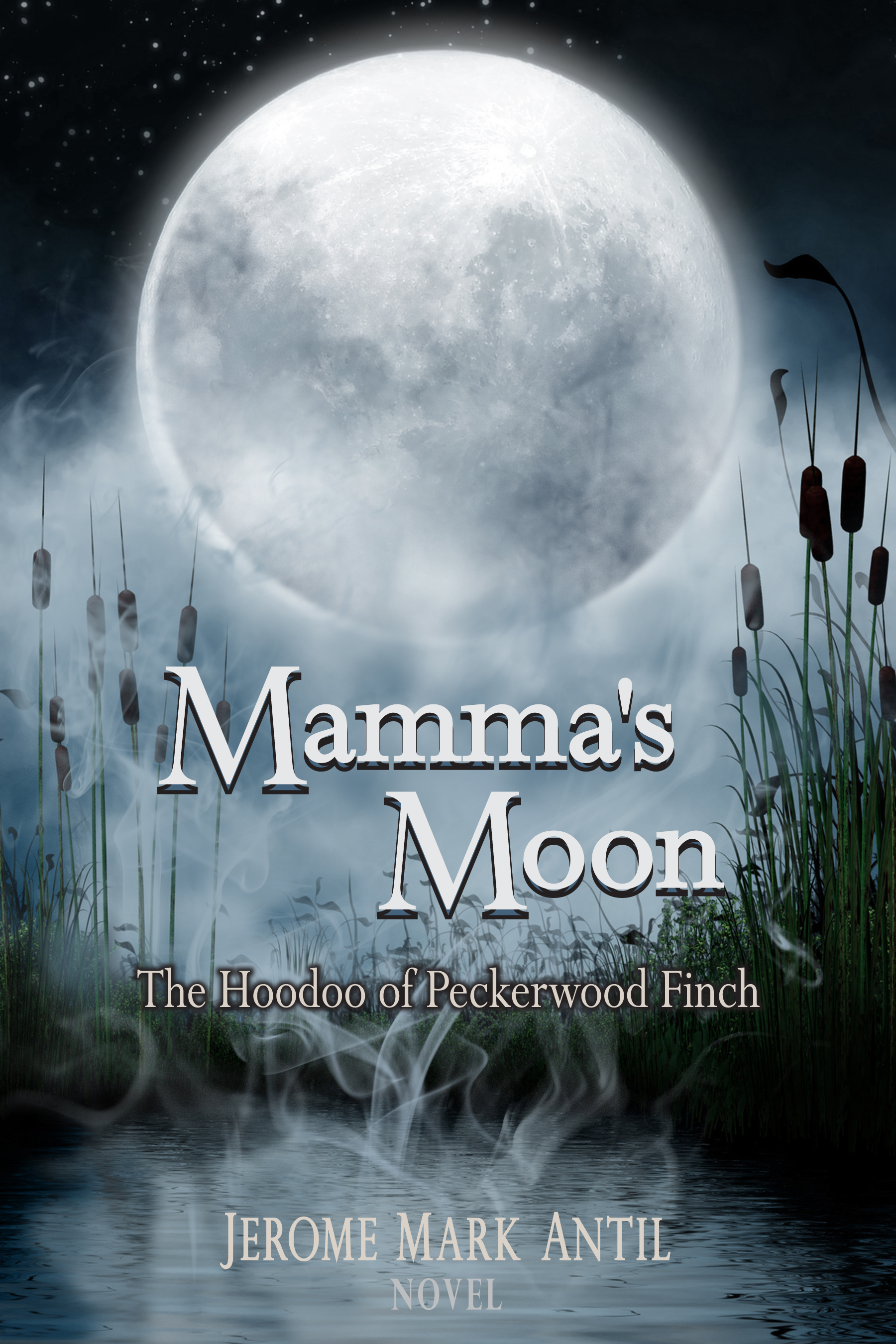 “Mamma’s Moon does for Acadiana what Truman Capote did for Tiffany’s or Tennessee Williams did for streetcars. This is a novel about a lot of things, including sex, crime, life, and death. But most of all, it’s a novel about hope and about love. Mamma’s Moon gives the reader a dramatic and insightful glimpse into the very special world of today’s Louisiana French Acadians, whose early tragic history was immortalized by Henry Wadsworth Longfellow in his classic poem, Evangeline, even before the heartless bayou’s more contemporary history was buried deep and forgotten. You’ve never met characters like you’ll meet here—unless you’ve already met them in Antil’s earlier novel, One More Last Dance. If you have, you’ll be delighted to be back with them again.”
~ Tom Hyman

An Interview with JEROME MARK ANTIL

In an interview, JEROME MARK ANTIL can discuss:

? The ways in which his family’s heritage and history formed his writing process for his novels.
? How two Louisiana icons – chef Leah Chase and Judge Laurie A. White – helped shape his Acadian books.
? The importance of researching and investing in the cultures that inform your novel (in this case, Louisiana).
? Making the late-in-life decision to become a writer, and the unique obstacles and rewards of making this career move.
? The strong women who have influenced his writing; the bigger than life characters.
? His passion for research and painting canvases with an integrity of historical fiction.
? His devotion to literacy in schools combating the growing illiteracy.
? How Barnes & Noble headquarters called him at home and arranged for his books to be in their stores.

An Interview with JEROME MARK ANTIL

Take us behind the scenes – where did “One More Last Dance” and “Mamma’s Moon” come from?
(Three people inspired One More Last Dance. After he was given his Last Rights by the priest and the doctor gave him two hours to live, I inspired a 94-year-old friend to get out of his death bed, live a year and a half longer and write his book. Another friend from the 1960s inspired my Gabe; a black man who taught me jazz. My father, the third was second generation Acadian, from Normandy, and a marvelous storyteller. Mamma’s Moon was inspired by an actual attempt on my life.)

What will fans of the first book in this series, “One More Last Dance,” enjoy about “Mamma’s Moon?”

(That the characters they love from the original novel are alive and well. They’ll like that the sequel is as strong or stronger than the first novel – which is rare.)

What can you tell us about your Acadian heritage and its influence on your writing?

(I knew our name was changed from Anctil to Antil when my grandparents (on my father’s side) moved to the U.S. from Canada at the turn of the twentieth century. I grew up in New York State, but my father would always tell me stories about the Acadians in Canada and the Cajuns of Louisiana, and he would have shrimp boils and make gumbos.)

Why are you so passionate about honoring and preserving Louisiana’s culture through writing?

(What’s happening to Louisiana both from outside sources and internal power control is criminal. Baton Rouge has literally become the rectum of America with the Mississippi splitting it in half and along with it the literacy and natural resources so mishandled the entire state is sliding into the Gulf of Mexico. Try to find a full-grown Cypress. You can’t. They been chipped and are stacked in “mulch” bags in big box home store retailers.)

What was your research process like? Specifically, how did you go about investigating the culture of Louisiana? Did you learn something you didn’t know previously?

(I had a New Orleans young man interview icon Ms. Leah Chase. He asked her several pages of my questions about life in New Orleans in her lifetime. I asked the criminal court in New Orleans to help my legal research and they assigned a criminal attorney to guide me. I spoke with libraries there and got pointed at things of interest. I was overwhelmed at the damage that has been caused to Louisiana by the indiscriminate spillway levees that destroyed entire towns and all the topsoil. A passenger plane crash that was forgotten about.)

You wrote part of “Mamma’s Moon” while staying at the Pontchartrain Hotel in uptown New Orleans where Tennessee Williams worked on “A Streetcar Named Desire” – did absorbing the atmosphere there strengthen your writing?

(I wrote much of One More Last Dance there, and some of Mamma’s Moon. It absolutely inspired me knowing that Tennessee Williams lived there, and Truman Capote frequented the bar. Hearing the streetcars going by and the jazz in the lobby certainly inspired me.)

Chef Leah Chase is known in Louisiana – and around the world – as the Queen of Creole Cuisine. How did you meet this iconic New Orleans celebrity, and how did she help shape your book?

(My wife and I ate at the famous Dooky Chase restaurant one evening after a Barnes and Noble book signing. Leah invited us to the kitchen, and we chatted, and I gave her a copy of my One More Last Dance novel. I wrote her a thank you letter. Six months later I hired a young man I had met at the Pontchartrain to visit her and see if he could interview her on my behalf. Leah welcomed him in with open arms and sat with him for more than an hour.)

You also turned to Orleans Parish Criminal Court Judge Laurie A. White for some guidance. What role did she play while you were writing “Mamma’s Moon?”

(Judge Laurie A. White played three important roles in the Peckerwood Finch novels. She asked for attorney volunteers to guide me in my court scenes. Attorney Lindsay Jay Jeffrey, at the Orleans District Criminal Court spent countless hours helping me. Judge White had me watch court in session for ideas and she also made suggestions to easing the dialect in One More Last Dance – which has since been revised. Judge White will be narrating the audio books of each novel.)

What role did your daughter play in inspiring you to become a writer?

(She asked me to write the bedtime stories I used to tell her, about growing up during WWII. She also asked me to write a booklet for fathers going through divorce. I wrote the very simple Handbook for Weekend Dads and it was a four-year Amazon bestseller in category. It’s been purchased in every state and 17 countries. My wife Pamela encouraged me to turn my stories into books.)

Your favorite writers include Mark Twain, Sir Arthur Conan Doyle, Ernest Hemingway and John Steinbeck. While we know these are some of the greatest writers in history – what draws you to their work?

(John Steinbeck for his historical integrity and sensitivity for human nature in private moments. Hemingway has taught me most, the more I write. He inspires me to ‘write what I know’ – and talk the way people talk so they can read it. Mark Twain taught me to graft short stories together into a novel. Doyle was always an easy, fun read.)

When you were a child, your family moved to Delphi Falls, New York, and the land occupied by your boyhood home is now a state park. And soon, there will be historical markers referencing you and your The Pompey Hollow Book Club series. What can you tell us about that?

(A retired Syracuse University professor donated the near million dollars to buy the land and make it a park. The two waterfalls are the draw – but as I grew up there will be advantage to me and my works as it is my childhood home. They will make my books available there – and markers at key points (my campsite – my bedroom – the rock we sat on. I’ll be attending an official opening.)

What’s next for you? Will readers hear from Peck Finch again?

(I’m writing about Tall Jerry and the Delphi Falls Trilogy – which are condensed novels that took place in 1953. I’m looking at options for Peck and gang. I’m also several chapters into a novel about America being taken over – but it frightened me enough to step away from it awhile.)