Paul Stanley will be signing copies of “Backstage Pass” at various locations during April and May.

Paul Stanley is the frontman and rhythm guitarist for KISS, which he cofounded in New York City in 1973. He is the designer of numerous KISS album covers, costumes, and concert stages, in addition to writing many of KISS’s most successful songs. With sales of more than one hundred million records worldwide, KISS sits atop the list of American bands, with the most gold-certified albums earned in history. Along with his bandmates, Stanley was inducted into the Rock and Roll Hall of Fame in 2014. A painter, with art sales reaching two million dollars; a solo musician; a musical stage performer; founding partner in Rock & Brews restaurants; and co-owner of the Arena Football League’s L.A. KISS, Stanley is a committed and active supporter of various Wounded Warrior Project organizations. He lives in Los Angeles with his wife, Erin, and four children. 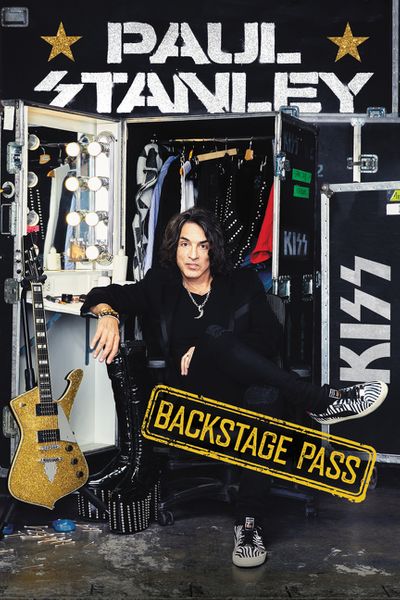 The New York Times bestselling author and front man and rhythm guitarist of KISS grants fans an all-access backstage pass to his personal life and shows them how to pursue a rock ‘n’ roll lifestyle of their own, offering hard-won advice from a music legend.

In this follow-up to his popular bestseller Face the Music, the Starchild takes us behind the scenes, revealing what he’s learned from a lifetime as the driving force of KISS, and how he brings his unique sensibility not only to his music career but to every area of his life—from business to parenting to health and happiness.

Backstage Pass takes you beyond the makeup as Paul shares fascinating details about his life—his fitness routine, philosophy, business principles, how he maintains his inspiration, passion, and joy after nearly 50 years of mega success including selling out tours, 100 million albums sold and an art career that has amassed over 10 million dollars in sales.

Divulging more true stories of the Rock & Roll Hall of Famer’s relationships, hardships, and pivotal moments, it also contains intimate four-color, never-before-seen photos from Paul’s personal collection, and offers surprising lessons on the discipline and hard work that have made him one of the healthiest and most successful rock ‘n’ roll icons in history.

This is the book for fans who love living large, but also want to take control and move ahead in everyday life. Paul shows you how you can rock ‘n’ roll all night and party every day—without missing a beat.