Tony Esposito and Rocky Wirtz, Chicago Blackhawks legends, along with author Bryan Smith, will be signing copies of “The Breakaway” in IL next month.

BRYAN SMITH is a senior writer at Chicago magazine and a contributing editor for Men’s Health. He is a two-time winner and six-time finalist for the National City and Regional Magazine Association’s Writer of the Year award. His work has been featured in The Best American Sports Writing, The Best American Newspaper Writing, and the Chicken Soup for the Soul series.

About Tony Esposito and Rocky Wirtz:

TONY ESPOSITO joined the Blackhawks as a rookie goalie in 1969 and recorded fifteen shutouts, a single-season record unlikely to be broken. He was inducted into the Hockey Hall of Fame in 1988; in the same year, his number 35 was retired by the Blackhawks. For the National Hockey League’s centennial celebration in 2017, Esposito was voted one of the hundred greatest players ever.

W. Rockwell (Rocky) Wirtz was named President of Wirtz Corporation and Chairman of the Chicago Blackhawks in October 2007, following the passing of his late father, William W. Wirtz. 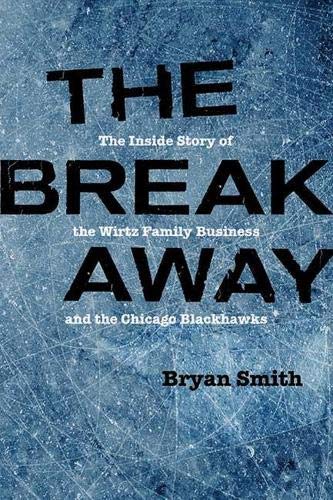 “This is a terrific book, a dramatic family saga told in artful prose and filled with emotional turmoil, a few surprisingly touching moments but enough dysfunction for a couple of Eugene O’Neill plays.” —Rick Kogan, Chicago Tribune

When Rocky Wirtz took over the Wirtz Corporation in 2007, including management of the Chicago Blackhawks, the fiercely beloved hockey team had fallen to a humiliating nadir. As chronic losers playing to a deserted stadium, they were worse than bad—they were irrelevant. ESPN named the franchise the worst in all of sports. Rocky’s resurrection of the team’s fortunes was—publicly, at least—a feel-good tale of shrewd acumen. Behind the scenes, however, it would trigger a father, son, and brother-against-brother drama of Shakespearean proportions. The Breakaway reveals that untold story.

Arthur Wirtz founded the family’s business empire during the Depression. From roots in real estate, “King Arthur” soon expanded into liquor and banking, running his operations with an iron hand and a devotion to profit that earned him the nickname Baron of the Bottom Line. His son Bill further expanded the conglomerate, taking the helm of the Blackhawks in 1966. “Dollar Bill” Wirtz demanded unflinching adherence to Arthur’s traditions and was notorious for an equally fierce temperament.

Yet when Rocky took the reins of the business after Bill’s death, it was an organization out of step with the times and financially adrift. The Hawks weren’t only failing on the ice—the parlous state of the team’s finances imperiled every facet of the Wirtz empire. To save the team and the company, Rocky launched a radical turnaround campaign. Yet his modest proposal to televise the Hawks’ home games provoked fierce opposition from Wirtz family insiders, who considered any deviation from Arthur and Bill’s doctrines to be heresy.

Rocky’s break with the edicts of his grandfather and father led to a reversal for the ages—three Stanley Cup championships in six years, a feat Fortune magazine called “the greatest turnaround in sports business history.” But this resurrection came at a price, a fracturing of Rocky’s relationships with his brother and other siblings. In riveting prose that recounts a story spanning three generations, The Breakaway reveals an insider’s view of a brilliant but difficult Chicago business and sports dynasty and the inspiring story of perseverance and courage in the face of intense family pressures.