Mark Ellenbarger will be signing copies of “Drawing Fire: A Pawnee, Artist, and Thunderbird in World War II” in TX this month.

Mark R. Ellenbarger is a retired American Airlines executive, and, founder and director of the Brummett Echohawk Project (brummettechohawkproject.com). 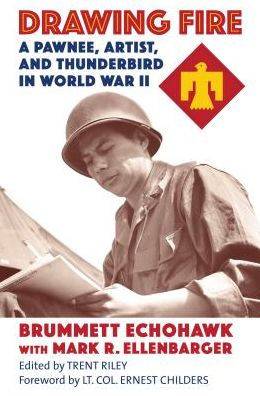 In 1940 Brummett Echohawk, an eighteen-year-old Pawnee boy, joined the Oklahoma National Guard. Within three years his unit, a tough collection of depression era cowboys, farmers, and more than a thousand Native Americans, would land in Europe—there to distinguish themselves as, in the words of General George Patton, “one of the best, if not the best division, in the history of American arms.” During his service with the 45th Infantry, the vaunted Thunderbirds, Echohawk tapped the talent he had honed at Pawnee boarding school to document the conflict in dozens of annotated sketches.

These combat sketches form the basis of Echohawk’s memoir of service with the Thunderbirds in World War II. In scene after scene he re-creates acts of bravery and moments of terror as he and his fellow soldiers fight their way through key battles at Sicily, Salerno, and Anzio. Woven with Pawnee legend and language and quickened with wry Native wit, Drawing Fire conveys in a singular way what it was like to go to war alongside a band of Indian brothers. It stands as a tribute to those Echohawk fought with and those he lost, a sharply observed and deeply felt picture of men at arms—capturing for all time the enduring spirit and steadfast strength of the Native American warrior.