David Housewright will be signing copies of his new book, “First, Kill the Lawyers: A Holland Taylor Mystery” in MN this month.

DAVID HOUSEWRIGHT has won the Edgar Award for his first Holland Taylor crime novel (Penance) and is the three-time winner of the Minnesota Book Award for his crime fiction. In addition to the Holland Taylor series, he is also the author of several novels featuring Rushmore McKenzie. He is a past president of the Private Eye Writers of America (PWA). He lives in St. Paul, Minnesota. 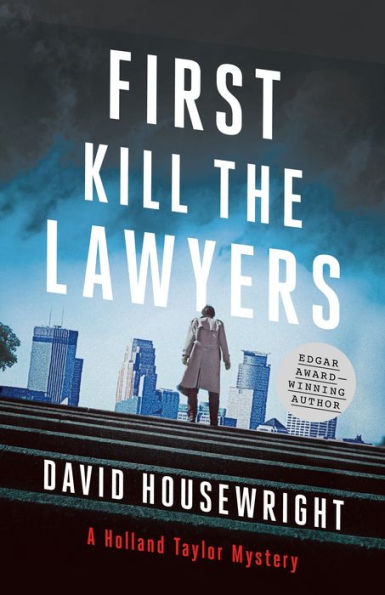 P.I. Holland Taylor returns in David Housewright’s Edgar Award-winning series with First, Kill the Lawyers, where Taylor is hired to recover stolen files before they are leaked, ruining more than just the careers of five local lawyers.

Five prominent attorneys in Minneapolis have had their computer systems hacked and very sensitive case files stolen. Those attorneys are then contacted by an association of local whistleblowers known as NIMN and are quietly alerted that they have received those documents from an anonymous source. If those files are released, then not only will those lawyers be ruined, but it might even destroy the integrity of the entire Minnesota legal system. This group of lawyers turns to Private Investigator Holland Taylor with a simple directive: stop the disclosure any way you can.

But while the directive is simple, the case is not. To find the missing files and the person responsible, Holland must first dive into the five cases covered in the files—divorce, bribery, class action, rape, and murder. While Taylor is untangling the associates and connections between the cases and families affected, things take another mysterious turn and the time before the files are released is running out. As the situation becomes more threatening, Holland Taylor is trapped in the middle of what is legal and what is ethical—between right, wrong, and deadly.