Award-Winning Teen Author Lauren Hudson will be signing copies of “The Deception” at KY next month.

2017 Independent Author of the Year, Lauren Hudson, co-authored her first published book at age thirteen. Her books, Our Best Tomorrow, The Ascension, and The Deception, have garnered multiple regional, national and international book awards that include, Readers’ Choice, London Book Festival, and Mom’s Choice Award honors.

The Ascension, the first book in Lauren’s Ascension trilogy, presented a coming of age tale and introduced readers to a secret Asterian world of guardian angels walking among us. The Ascension won Grand Prize at the Great Southwest Book Festival and was named 2017 Independent Book of the Year. Other accolades include Best Young Adult Book at the London Book Festival, Mom’s Choice Gold, and a Reader’s Choice Medal. A student at Dixie Heights High School in Northern Kentucky, Lauren has traveled across the United States and Europe, appearing on national television several times to promote her published works. 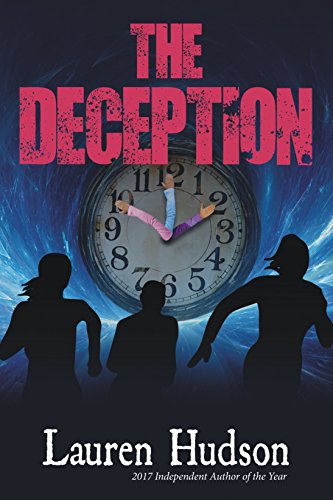 Winner San Francisco Book Festival Best Young Adult Fiction
Paris Book Festival Runner Up Best Young Adult Fiction
The Deception, second in The Ascension trilogy, finds triplets Felix, Jinx, and Desdemona Anchor with little time to bask in the glory of their victory over Jane and her army of captive Asterians. What begins as a competition to select the newest member of the Asterian Society quickly becomes a series of adventures that push the Anchors’ powers to their limits.
Together, the Anchors must cross boundaries of time and space to confront a darkness seeking to ensnare the human race. Can three gifted teens who can see the past, present, and future remain united to ward off evil and fulfill their promise? Or, will a grand deception stand in the way of the Anchors’ quest to achieve their destiny?