Mickey Lolich, former Detroit Tigers great, will be signing copies of “Joy In Tigertown” during September and October.

Mickey Lolich pitched in the major leagues for 17 years. He is best known for his three complete-game victories in the 1968 World Series. Jim Leyland managed the Detroit Tigers from 2006 to 2013. He resides in Pittsburgh, Pennsylvania. 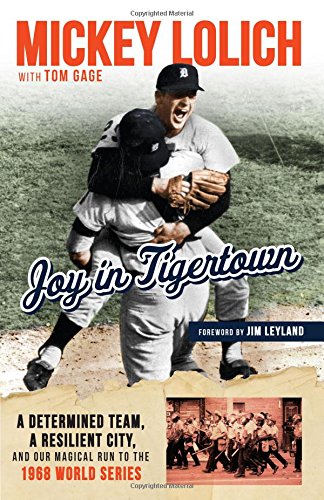 The 1968 World Series remains one of the most iconic in major league history. Featuring Bob Gibson in MVP form, Al Kaline, and Mickey Lolich, it was baseball at its best. Told with the vibrant first-hand perspective of Lolich himself and the expertise of award-winning Detroit journalist Tom Gage, this is the remarkable saga of that 1968 season which culminated in Tigers glory. Incorporating new reflections from players and personnel, Joy in Tigertown traces such achievements as Denny McClain’s 31-win season as well as the remarkable slugging performances of Kaline, Norm Cash, Willie Horton, and Bill Freehan.