Jules Feiffer, Pulitzer Prize winning cartoonist, will be signing copies of “The Ghost Script” in New York next month.

Jules Feiffer is a cartoonist, playwright, screenwriter, children’s book author and illustrator, and member of the American Academy of Arts and Letters. He teaches a humor-writing class at Stony Brook Southampton College and lives in East Hampton, New York. 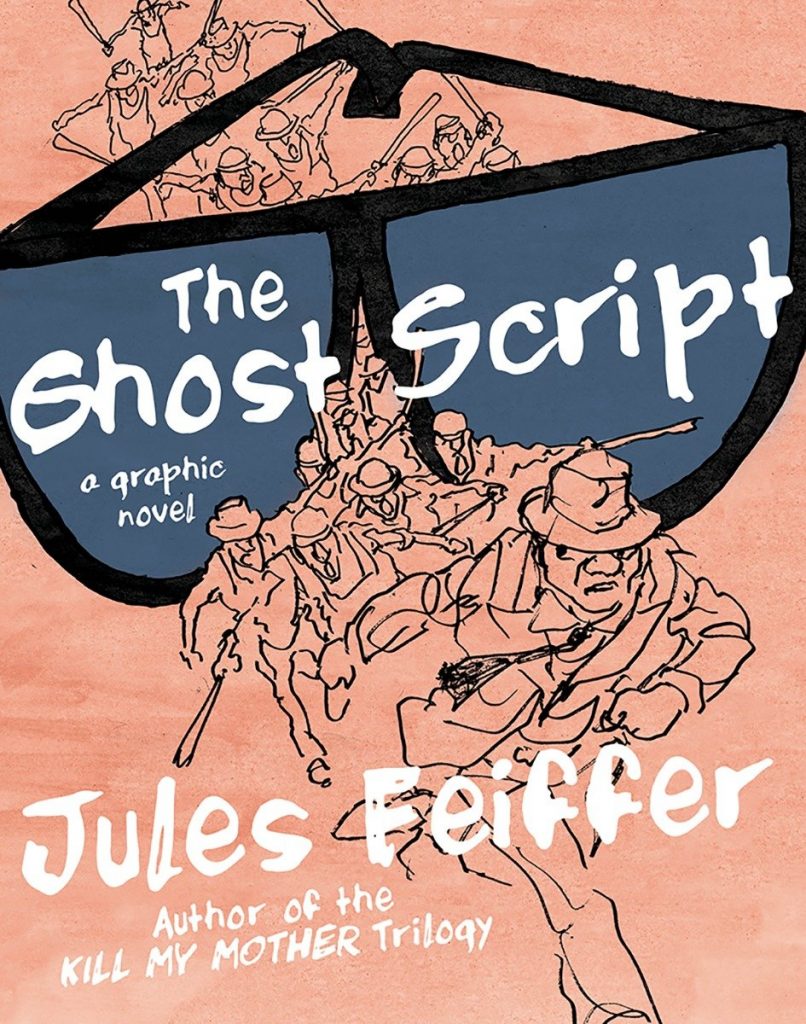 Never has the incomparable Jules Feiffer been more eerily prophetic than in this stunning finale to his best-selling Kill My Mother trilogy.

Hollywood is haunted. 1953. Ghosts abound. In particular, the ghost of Detective Sam Hannigan?murdered in Bay City twenty-two years earlier by Addie Perl, the hired assassin who then bought a Hollywood nightclub with her blood money. Among the nightclub’s favored clientele is Sam’s widow, Elsie. Blinded by a Japanese bullet while on a USO tour in the South Pacific, Elsie has been reinvented into “Miss Know-It-All,” a Hollywood gossip columnist. But blind Elsie is haunted by the ghost of her husband, Sam, who asks her accusingly: “If Miss Know-It-All knows so much, why can’t she find Cousin Joseph, the man who had me killed?”

Hollywood is haunted. Spooks abound. Agents Shoen and Kline, investigators for the House Un-American Activities Committee, manipulate the blacklisted, buxom, over-the-hill starlet-turned-hooker Lola Burns into working for them and naming the names she had once refused to betray.

Hollywood is haunted. Communist screenwriters Oz McCay and Faye Bloom are noisily plotting, boozing, and laughing their way toward their impending disaster.

Hollywood is haunted. As an inside joke, writer-director Annie Hannigan?Sam and Elsie’s daughter?comes up with the idea of a “Ghost Script” that may or may not exist but is rumored to expose the inside story of the Hollywood blacklist and the names of its undercover masterminds, most notably the reclusive philanthropist Lyman Murchison, a superpatriot with a dirty secret.

Hollywood is haunted. Stumbling his way through this maze is private eye Archie Goldman, a tough-talking, nebbishy good guy who’s never been in a fight he didn’t lose. Archie’s single aim is to live up to the memory of the ghost who haunts him: Detective Sam Hannigan. Trail along with Archie into the middle of this muddle, as he tracks the arc of history and finds that it has rounded itself off into a circular firing squad.

In this antic and brilliant assault on our past and present, Jules Feiffer shows us, once and for all, that if there’s one thing Americans hate, it’s learning from past mistakes. Every twenty years or so, a new generation must address new biases and injustices that are virtually identical to past biases and injustices. But who remembers? Exposing the tragically cyclical path of American history, Jules Feiffer pens the final installment to a noir masterpiece.