Jon D’Amore will be signing copies of “The Delivery Man” in NJ during October.

It was the 1960s. The place was Hudson County, New Jersey…a tunnel ride away from midtown Manhattan. Jon was first published at 10. A story he’d written about the Civil War was transformed into a mimeographed book and distributed throughout the county school system. He went on to write for the school newspaper. Also at that time the pre-teenager began studying the guitar, leading him to hone his love and knowledge of music…and the art of composing.

In a logical progression, he graduated school, played in club bands, opened for touring acts and by his mid 20s was traveling cross-country as a session musician.

While touring during the 1970s, Jon was also a feature writer for New Jersey’s 3rd largest newspaper, The Herald News, simultaneously allowing him to enjoy the best of his favorite worlds; Playing rock & roll…and writing.

In 1985, Jon found a different side of life. He said, “Goodbye and it’s been a slice!” to the music business and got a job in the corporate world.

By 1999, another change was about to take place. For more than two decades Jon knew that within him there was the desire and ability to write…it’s just that New Jersey wasn’t the place to do it.

So he drove to Los Angeles…and stayed.

He started writing as soon as he arrived…and didn’t stop until the manuscript and screenplay for “The Boss Always Sits In The Back” were completed.

Though he claims he’s not an actor, Jon has appeared in several independent shorts and feature films, and co-starred in the play “Two Nowhere Men” at the 2002 Can Festival (yeah, that’s right. The “Can” Festival).

Along with “The Boss Always Sits In The Back,” he’s written the screenplays “Mad Avenue” and “The Delivery Man,” the stage play “For What It’s Worth” (to stellar reviews at the award winning 2001 Can Festival), co-wrote the feature scripts “Rubdown” with Laura Fuino, “Deadfellas” with Steve Barr, and “2022” with Brian Evers, and the short, “Women Are Pigs” (titled by the co-writer, Kelli Crawford).

Jon’s writing has received rousingly enthusiastic industry response, and he is currently waiting for the check that’s supposedly in the mail.

Jon continues to reside in California…and writes all the time. 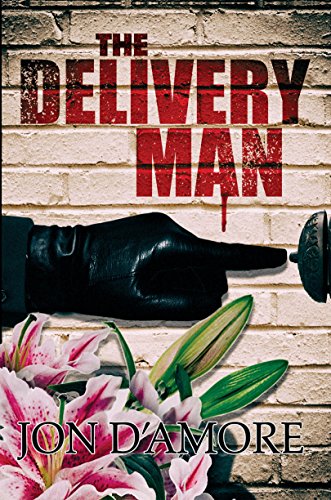 When a man with a conscience bent on revenge rids society of those who destroy the lives of innocent people, is he a criminal, a hero…or The Delivery Man?

The doorbell rings. You answer it. The handsome man holding a bouquet asks your name. When you confirm you’re the one the flowers are for, he pulls out his pistol and silencer and puts a bullet in the center of your forehead.

If the Delivery Man pays you a visit, it means you did something despicable to someone who trusted you, and now it’s time to pay.

The FBI determines that the same gun was used in several hits across the U.S. and Asia, and Special Agent Pai Lee Valentine of the Serial Homicide Division is assigned to hunt down the maniacal assassin.

Doggedly profiling her prey, she finds he’s not the serial killer or homicidal maniac her boss, Fred Barrett, thinks he is.

But the fact remains, it’s Valentine’s job to bring the Delivery Man in…or kill him.

Unexpectedly, Valentine is thrown into one action scene after another; a Los Angeles shootout, a quick-action helicopter and missile attack to eliminate the head of the Vietnamese underworld, and thwarting two terrorist bio-gas attacks on American soil.

As the Delivery Man reveals the deeply impassioned motives behind his murderous spree, you’re suddenly cheering him on and looking forward to seeing him track down his next victim.

Is he a criminal…or a vigilante? Valentine must make a choice. Does she arrest the Delivery Man for the murders, or let him continue to eliminate those that deserve it?

It’s between the letter of the law…justice…and her heart.

The Delivery Man is a cleverly woven action thriller and murder mystery interlaced with just the right amounts of revenge, espionage, romance, humor and deceit. It’s truly an All American Story.