NC Children’s Author Melissa Rooney and Ohio Illustrator Stacy Fabbre will be signing copies of their new Children’s Picture Book, *The Fate of the Frog* with a *hands-on* reading of their children’s picture book in OH next month.

Melissa Rooney grew up in Martinsville, VA, and graduated from Martinsville High School in 1988. After receiving undergraduate degrees in English and Chemistry from the College of William and Mary (Williamsburg, VA), she attended graduate school at the University of North Carolina in Chapel Hill, where she studied electrochemistry under the direction of R. Mark Wightman and was awarded her Ph.D. in Chemistry in 1998. Melissa conducted research in the laboratory of Alan M. Bond at Monash University in Melbourne, Australia, from 1999-2002 and was awarded a Post-Doctoral Fellowship from the Australian Research Council from 2000-2003. In 2002, she returned to North Carolina to raise her family with her husband, Mike Rooney.

Since moving to Durham, Melissa has been a regular columnist with the Durham News (Raleigh News and Observer) and has written for Highlight’s Children’s Magazine among other serial publications. She is currently a senior scientific editor with American Journal Experts and a teaching artist in the Durham Arts Council’s Creative Arts in Public and Private Schools (CAPS) program, in which she provides engaging, science-based workshops for NC public schools. Melissa’s children’s poem, Beyond the Dark, won first place in the ‘Poetry for Children’ category of the Burlington Writer’s Club and was subsequently published in Imagining Heaven (An Anthology of Personal Visions of Heaven), Linda Matney (Ed.). Her adult poem, Hope, won first place in the ‘Charles Shull Traditional Poetry’ category of the Poetry Council of North Carolina and was published in the Bay Leaves Anthology (2009).

Melissa believes that society underestimates our children’s interest in and ability to understand ‘complicated’ scientific subjects. She is confident that the sooner we expose our children to these ideas, the less intimidated they will be by such subject matter in the future. Whether or not they understand everything is beside the point. What’s important is whether or not they are interested. Thus, presenting scientific subjects to our young children in an entertaining way lays important groundwork for their future and the future of our society, on the whole.

Melissa, her husband Mike, and their three children happily reside in Durham, NC. 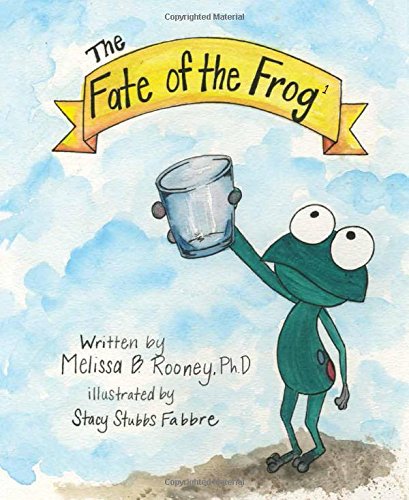 This Dr. Seuss-inspired tale by Melissa Rooney follows one frog s plight to escape its evaporating birth puddle in a setting plagued by drought. Richly illustrated and written with lyrical mastery, this heartfelt story emphasizes the importance of water resources and is sure to capture the imaginations of children and adults, alike.