Bruce Arena, famed soccer coach, will be signing copies of “What’s Wrong With US?” in CA next month.

He is a member of the National Soccer Hall of Fame. Arena has had a long and distinguished coaching career and is considered to be one of the most successful coaches in North American soccer history, having won five College Cup titles and five MLS Cup titles. He was head coach of the U.S. at the 1996 Summer Olympics, the 2002 FIFA World Cup and the 2006 FIFA World Cup, head coach of the New York Red Bulls, D.C. United, and LA Galaxy in Major League Soccer, and coached the University of Virginia to several college soccer championships. He is the U.S. soccer team’s longest-serving head coach.

Before beginning his coaching career, Arena was a goalkeeper for Cornell University, and earned one cap with the United States men’s national soccer team, making him the only U.S. national team manager in the modern era to have formerly played for the team. 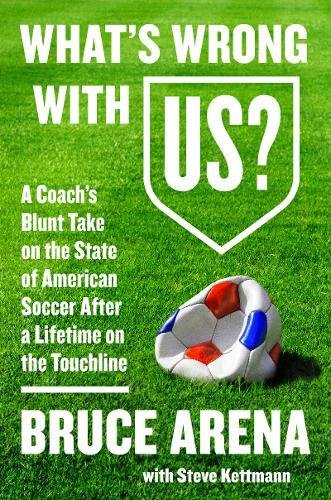 Timed for publication just prior to the 2018 World Cup in Russia, a revealing memoir by a leading American soccer coach shares insights into how the USMNT has prepared to compete in the past.