Elgin Baylor, NBA legend, will be signing copies of “Hang Time” in multiple locations during April.

ELGIN BAYLOR played thirteen seasons in the NBA for the Minnesota/Los Angeles Lakers, appearing in eight NBA finals. A #1 draft pick, NBA Rookie of the Year, and eleven-time NBA All-Star who was named to the All-NBA First Team ten times, Elgin is considered one of the game’s all-time greatest players. After retiring from the NBA as a player, he coached the New Orleans Jazz, and then in 1986, became the general manager of the Los Angeles Clippers, a position he held for twenty-two years. In 2006, he was named NBA Executive of the Year. 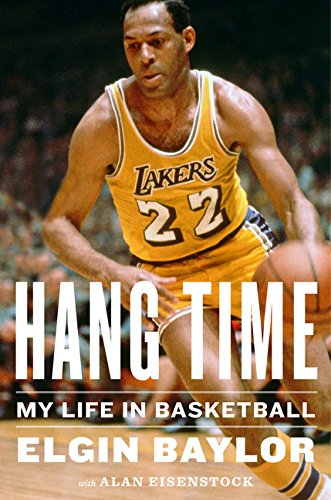 People think of Elgin Baylor as one of the greatest basketball players in the history of the game—and one of the NBA’s first black superstars—but the full extent of his legacy stretches beyond his spectacular, game-changing shots and dunks. With startling symmetry, Baylor recounts his story: flying back and forth between the U.S. Army and the Lakers, his time as a central figure in the great Celtics-Lakers rivalry and how he helped break down color barriers in the sport, his 1964 All-Star game boycott, his early years as an executive for the New Orleans Jazz, and twenty-two years as general manager for the notorious L.A. Clippers and Donald Sterling, spent fighting to draft and sign young, black phenoms—only to be hamstrung by his boss at every turn.

No one has seen the league change, and has worked to bring change, more than Baylor. Year after year, he continued to fight and persevere against racism. At the beginning of his career, he was forced to stay in separate hotel rooms. From those days to today’s superstardom, he has had a front-row view of the game’s elevation to one of America’s favorite sports. For the first time, Elgin Baylor tells his full story. He’s played with the legends, lived with them, and knows more about the NBA than anyone living, and is finally ready to set the record straight.