Patricia Heaton, star of “The Middle”, will be signing copies of “Patricia Heaton’s Food For the Family” at multiple locations during February.

Patricia Heaton stars on ABC’s hit sitcom The Middle and on the Food Network show Patricia Heaton Parties. She has received three Emmy Awards, one for Outstanding Culinary Program and two for Outstanding Lead Actress in a Comedy Series, and has been nominated seven times. She is the author of the New York Times bestseller Motherhood and Hollywood; runs the production company FourBoys Entertainment with her husband of more than twenty-five years, David Hunt; and is the mother of four sons. Patricia lives in Los Angeles. 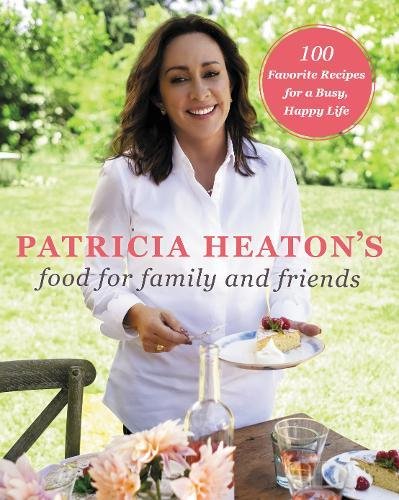 A beautiful, full-color collection of 100 tasty, simple recipes for unforgettable meals and gatherings from the enormously popular star of the ABC sitcom The Middle and Food Network’s Patricia Heaton Parties.

A busy working mother raising four boys, Patricia Heaton couldn’t be more comfortable playing “America’s mom” on hit television shows such as Everybody Loves Raymond and The Middle. Though she may be a Hollywood star today, this down to earth, practical Midwesterner likes to have fun entertaining her loved ones and has never forgotten her roots.

Growing up in the suburbs of Cleveland in the 1960s, Patricia’s hard-working parents—like the characters she plays on TV—didn’t have a lot of extra money. With five kids to raise, extras like movies and restaurant meals were special treats. Home cooked dinners were rib-filling basics: meatloaf, spaghetti and meatballs, chicken, pork chops, burgers, fish sticks, and pot roast. Yet her mother didn’t let a tight budget stop her from dreaming big, inspired by Julia Child.

On her Food Network show Patricia Heaton Parties, Patricia celebrates her culinary beginnings, transforming familiar American fare into delicious, sophisticated, lightened versions for entertaining family and friends. In this fabulous cookbook, Patricia shares her budget-friendly, simple, and deeply satisfying recipes. Some will be on the healthier side, and all will be inspired by the dishes she loved growing up, the favorites she’s relied on to feed her hungry boys, and the scrumptious showstoppers she serves at her fun-filled, casual parties and get-togethers.

Patricia Heaton’s Food for Family and Friends features 100 recipes for appetizers, sides, and main dishes, as well as cocktails and “guest goodies”—little treats to send home with your guests, including:

Patricia provides readers with the tools for everything to make it easy to pull it all together with sample menus, kitchen setup, and tips for getting organized. Best of all, she spices it up with hilarious stories, family photos, and anecdotes from her Hollywood career.