Bootsy Collins, member of the Rock & Roll Hall of Fame, will be signing copies of “World Wide Funk” in Los Angeles, CA this month.

Rising to prominence with James Brown in the early 1970s, and later with Parliament-Funkadelic, Collins’s driving bass guitar and humorous vocals established him as one of the leading names in funk. He is a member of the Rock and Roll Hall of Fame, inducted in 1997 with 15 other members of Parliament-Funkadelic. 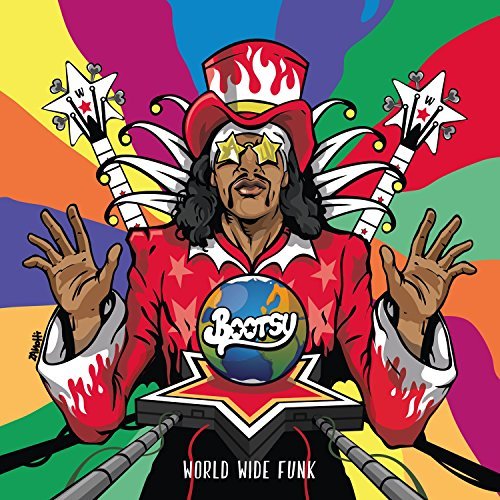 World Wide Funk was recorded at Collins’ own Re-Hab Studio in his native Cincinnati, although not all his collaborators showed up at his doorstep. Many sent in their parts remotely, though you could hardly tell. The album’s title track features beatboxing pioneer Doug E. Fresh, former Guns N’ Roses guitar wizard Buckethead, and rising funk bassist Alissia Benveniste — a crew that coheres seamlessly on a joyous, party-funk workout. Snoop Dogg makes an assist on “Hi-On-Heels,” a smoldering R&B plea for sensuous release that also features singer October London unleashing the power of his considerable charisma. Laidback and tastefully tuneful, it counterbalances more freewheeling tracks such as “Bass-Rigged-System,” a veritable super-summit of bassist starring Collins, Benveniste, Béla Fleck And The Flecktones’ Victor Wooten, Ivorian virtuoso Manou Gallo, and jazz legend Stanley Clarke of Return To Forever. Even with that much low end being detonated at once, the song bounces along on immaculate grooves, fuzzed-out licks, and a good-natured, round-robin show of solidarity.

The flamboyant Collins never passes up a chance to celebrate himself, even amid the easygoing camaraderie of World Wide Funk. Aided by P-Funk alumnus Dennis Chambers and guitar ace Eric Gales, the bassist reaches deep into his pocket of tricks to turn his instrument into an interstellar vehicle — whipping up the latest chapter of his ongoing self-mythology in the process. “Hot Saucer” gives the initial impression that Bootsy might be returning to The Mothership, Parliament’s potent galactic symbol of Afrofuturist deliverance. But instead of flying saucers, the song dwells on saucers of a culinary kind, as well as the illicit pleasures that might be served in Bootsy’s kind of kitchen. Musiq Soulchild and Big Daddy Kane might seem like an odd match on paper, but their disparate vocals styles — the former sweet, the latter smoky — elevate “Hot Saucer” into a thing of pure bliss. And on “Illusions,” Public Enemy’s Chuck D packs a monster verse of tightly coiled urgency and politically fueled rage.

Chambers isn’t the only former P-Funk member who appears on the album. The late keyboard genius Bernie Worrell, who died in 2016, is both the subject and star of “A Salute To Bernie.” Collins assembled the song using synthesizer tracks that Worrell had recorded in the early ’00s but left unused. Worrell’s imprint is unmistakable — but where his whirring synth vamps turned classics like Parliament’s “Flash Light” and Funkadelic’s “One Nation Under A Groove” into sensory-overload jams, here his keys are layered over a tender, mournful elegy to a departed friend. Speaking of “A Salute To Bernie,” Collins recently said, “The track I picked felt like Bernie speaking, which was his favorite way of communicating. I felt Bernie’s presence.”

Collins is doubtlessly the ringleader of World Wide Funk, but the album’s bonhomie is a testament to how even the most ferociously gifted and exhibitionist funkster can age gracefully and poignantly.