Jonah Ray & Felicia Day, stars of Mystery Science Theater 3000, will be signing copies of “MST3K: The Return” in Los Angeles, CA this month.

Felicia Day was born on June 28, 1979 in Huntsville, Alabama, USA as Kathryn Felicia Day. She is an actress and producer, known for her work on TV and the web video world. She has appeared in mainstream television shows and films, including “Supernatural”, and a two-season arc on the SyFy series “Eureka”. However, Felicia may be best known for her work in the web video world. She co-starred in Joss Whedon’s Internet musical “Dr. Horrible’s Sing-Along Blog,” and created and stars in the hit web series “The Guild”. Felicia is creative chief officer of her production company Knights of Good, which produced the web series “Dragon Age” and the YouTube channel Geek & Sundry. 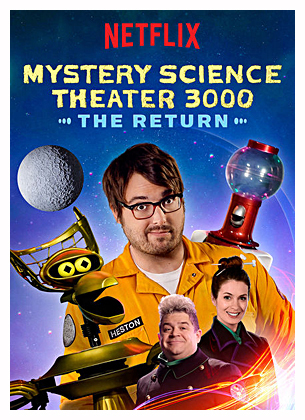 Mystery Science Theater 3000 (MST3K) is an American television comedy series created by Joel Hodgson and produced by Best Brains, Inc. The show premiered on KTMA in Minneapolis, Minnesota, on November 24, 1988. It later aired on The Comedy Channel/Comedy Central for seven seasons until its cancellation in 1997. Thereafter, it was picked up by The Sci-Fi Channel and aired for three seasons until another cancellation in August 1999. A sixty-episode syndication package titled The Mystery Science Theater Hour was produced in 1995. In 2015, Hodgson led a crowdfunded revival of the series with 14 episodes in its eleventh season, released on Netflix on April 14, 2017. To date, 211 episodes and a feature film have been produced.

The show initially starred Hodgson as Joel Robinson, a janitor trapped against his will by two mad scientists on the Satellite of Love and forced to watch a series of B movies as a part of the scientists’ plot to take over the world. To keep his sanity, Joel crafts a number of robot companions—including Tom Servo, Crow T. Robot, and Gypsy—to keep him company and help him humorously comment on each movie as it plays, a process known as riffing. Each two-hour episode would feature a single movie in its entirety along with associated public domain films, with Joel, Tom, and Crow watching in silhouette from a row of theater seats at the bottom of the screen. These scenes were framed with interstitial sketches. The show’s cast changed over its duration; most notably, the character of Joel was replaced by Mike Nelson (played by Michael J. Nelson) in the show’s fifth season. Other cast members, most of whom were also writers for the show, include Trace Beaulieu, Josh Weinstein, Jim Mallon, Kevin Murphy, Frank Conniff, Mary Jo Pehl, Bill Corbett, Paul Chaplin, and Bridget Jones Nelson. The revival features a primarily new cast, including Jonah Ray as the new human test subject, along with Felicia Day and Patton Oswalt.