Chris Jericho, wrestling superstar, will be signing copies of “No Is A Four Letter Word” at various locations across the country during August and September.

Chris Jericho, son of former NHL star Ted Irvine, is the author of three New York Times bestsellers, a six-time WWE World Heavyweight Champion, the lead singer of heavy metal band Fozzy, and the host of the Talk Is Jericho podcast. He lives in Tampa, Florida, with his wife and three children. 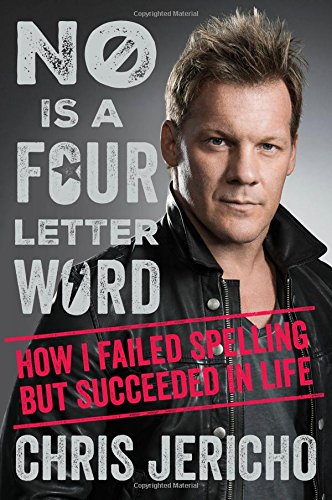 Written in Chris Jericho’s trademark style-jam-packed with ridiculous stories and hilarious references-No Is a Four Letter Word is organized around twenty-two principles on what it takes to make it to the top of your field, featuring stories from legends and influencers along the way. Whether it’s discovering how to make any situation work (like when Jericho bargained with Vince McMahon for the chance to meet Keith Richards…with an assist from Jimmy Fallon); spending money to make money (like when he doled out tens of thousands of dollars on his trademark light-up jackets because that’s what KISS would do), or learning from his NHL-legend father to always sell himself, Jericho guides readers on his journey up success’s ladder and shows them how they can apply these principles in their own lives.