Bryan Cranston, star of “Breaking Bad”, will be signing copies of “A Life In Parts” in California next month.

Bryan Cranston won four Emmy Awards for Outstanding Lead Actor in a Drama Series for his portrayal of Walter White in AMC’s Breaking Bad. He holds the honor of being the first actor in a cable series, and the second lead actor in the history of the Emmy Awards, to receive three consecutive wins. In 2014 he won a Tony Award for his role as Lyndon B. Johnson in the bio-play All the Way. In film, Cranston has won two Screen Actors Guild Awards and received an Academy Award nomination for his leading role in Trumbo. Among his numerous television and film appearances, he was nominated for a Golden Globe and three Emmys for his portrayal of Hal in FOX’s Malcolm in the Middle. He is the author of A Life in Parts. 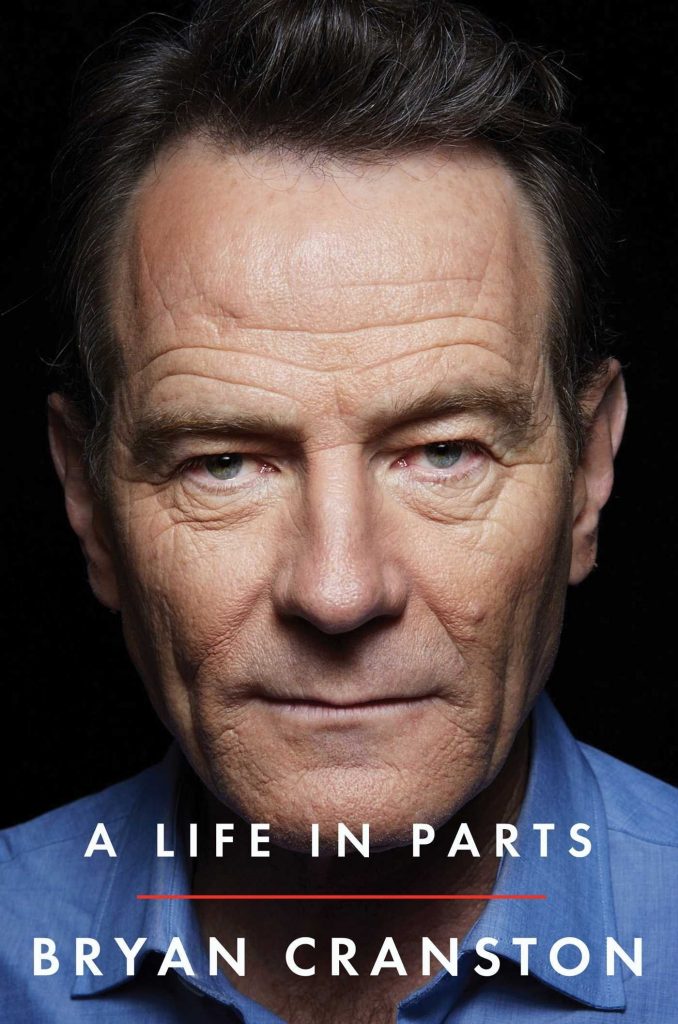 A poignant, intimate, funny, inspiring memoir—both a coming-of-age story and a meditation on creativity, devotion, and craft—from Bryan Cranston, beloved and acclaimed star of one of history’s most successful TV shows, Breaking Bad.

Bryan Cranston landed his first role at seven, when his father, a struggling actor and director, cast him in a United Way commercial. Soon, Bryan was haunting the local movie theater, memorizing and reenacting favorite scenes with his older brother. Acting was clearly the boy’s destiny—until one day his father disappeared. Suddenly, destiny took a back seat to survival.

Seeking something more stable, perhaps subconsciously trying to distance himself from his absent father, Cranston decided on a career in law enforcement. But then, a young man on a classic cross-country motorcycle trip, Cranston one day found himself stranded at a rest area in the Blue Ridge Mountains. To pass the time he read a tattered copy of Hedda Gabler, and in a flash he found himself face-to-face once again with his original calling. Suddenly he thought: This was what he wanted to do, what he would do, with the rest of his life. Act.

In his riveting memoir, A Life in Parts, Cranston traces his zigzag journey from his chaotic childhood to his dramatic epiphany, and beyond, to mega-stardom and a cult-like following, by vividly revisiting the many parts he’s played, on camera (astronaut, dentist, detective, candy bar spokesperson, President of the United States, etc.) and off (paperboy, farmhand, security guard, dating consultant, murder suspect, dock loader, son, brother, lover, husband, father). With great humor, and much humility, Cranston chronicles his unlikely rise from a soap opera regular, trying to learn the ropes and the politics of show business on the fly, to a recurring spot as Tim Whatley on Seinfeld, finding himself an indelible part of popular culture. He recalls his run as the well-meaning goofball, Hal, on Malcolm in the Middle, proving to writers and fans that he was willing to do anything, anything, for a laugh, and he gives a bracing account of his challenging run on Broadway as President Lyndon Johnson, pushing himself to the limit as he prepared, physically and mentally, for a tour de force that would win him a Tony, to go along with his four Emmys.

Of course, Cranston dives deep into the grittiest, most fascinating details of his greatest role, explaining how he searched inward for the personal darkness that would help him create one of the most riveting performances ever captured on screen: Walter White, chemistry teacher turned drug kingpin.

Discussing his failures as few men do, describing his work as few actors can, Cranston has much to say about innate talent, its benefits, challenges, and proper maintenance, but ultimately A Life in Partsis about the necessity and transformative power of hard work.