AJ Mendez Brooks, former wrestling star, will be signing copies of “Crazy Is My Superpower” at various locations across the country during April.

AJ MENDEZ BROOKS is a former WWE wrestler and three-time Diva champion under the ring name AJ Lee. She is an animal rescue ambassador for several organizations including the ASPCA, and works with Girls Make Games, a program encouraging young women to pursue science and tech-based careers. She lives in Chicago with her husband, Phil ‘CM Punk’ Brooks. 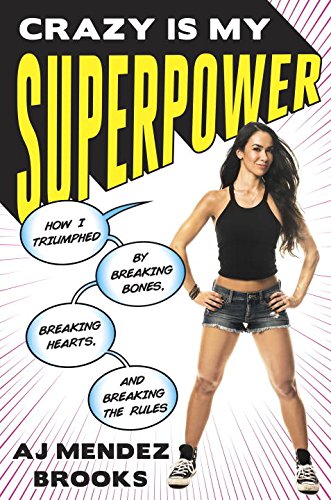 Recently retired WWE superstar AJ Mendez Brooks is a powerhouse—strong, quirky, and totally confident. But that wasn’t always the case. With humor and tremendous heart, she opens up for the first time about her harrowing struggle to understand her demons and the diagnosis that helped her gain control over her life.

Everything I was told should be my greatest insecurities and weaknesses, everything that I’ve been labeled—SHORT, NERDY, SKINNY, WEAK, IMPULSIVE, UGLY, TOMBOY, POOR, REBEL, LOUD, FREAK, CRAZY—turned out to be my greatest strengths. I didn’t become successful in spite of them. I became successful because of them.

Growing up AJ was a quiet girl trying to act “normal” when she felt anything but. As her family struggled with drug addiction, poverty, and mental illness, she found escape through comic books and video games, and was inspired by the tough and unconventional female characters. It wasn’t until she discovered pro wrestling that she learned superheroes could be real.

Determined to become the superhero she’d always admired, AJ trained and sacrificed for years to achieve her dream of wrestling professionally. Yet she quickly faced industry pressure to play the role of the damsel in distress and to dress more provocatively to cater to male fans. But she fought back and created an ass-kicking alter ego that was a genuine representation of herself: nerdy, enthusiastic, and a little bit crazy.

With humor and tremendous heart, AJ opens up for the first time about her harrowing struggle to understand her demons and the mental illness diagnosis that helped her gain control over her life. What most people view as a hardship, AJ embraced as inspira­tion for her superhero persona, shattering the stigma attached to mental illness.

Charting her journey from a scrappy girl in an unstable home to an empowered wrestling champion, Crazy Is My Superpower is an un­flinchingly honest story and brave confessional about her long road to self-acceptance.