Ziggy Marley, 2nd generation musician, will be signing copies of “Ziggy Marley and Family Cookbook” at California in October.

Throughout the course of his three-decade career, Ziggy Marley has built a music legacy both alongside his siblings with Ziggy Marley & The Melody Makers (ten albums) and as a solo artist (six albums to date). As of 2016, Marley’s music has garnered seven Grammy Awards and an Emmy; the humanitarian, singer, songwriter, and producer continually progresses at every turn. In 2012, he launched Ziggy Marley Organics, which includes a line of GMO-free coconut oils and hempseed snacks. Deeply committed to charity work, Ziggy leads U.R.G.E. (Unlimited Resources Giving Enlightenment), his nonprofit organization that focuses on uplifting children’s lives through education around the world. He is also the author of the children’s book “I Love You Too,” published by Akashic Books/Tuff Gong Worldwide. 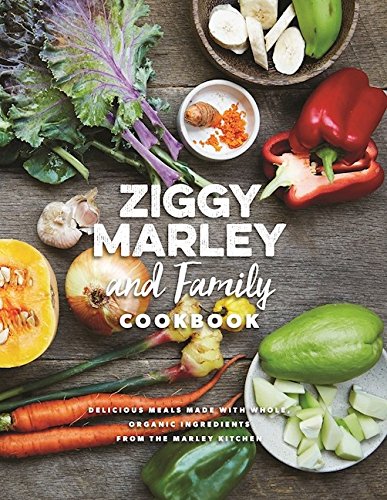 “The cookbook predominately features several recipes that are vegan and vegetarian, but also includes meat and fish recipes, some of which are fusions of Jamaican cuisine, and his wife’s Israeli and Iranian background — food Marley promises that anyone can enjoy even if they are not Jamaican.”
Caribbean Life

“A brightly illustrated exhortation to eat simple meals compounded from healthy ingredients. Some of the recipes are rooted in the Jamaican food he grew up with—you’ll find his take on jerk chicken—but much of it is globally inspired. Look for his ‘Miami apple and feta salad’ or try the almond coconut smoothie. Included are a good number of vegetarian, vegan and gluten-free items.”
Shepherd Express

“This is not the antiseptic cooking of a catering kitchen, it is family-style with pans that have done their duty for years and show it. Pictures of the family eating and enjoying the food add to entire family-centric feeling the book creates . . . This is a beautiful cookbook filled with easy, healthy recipes that are not only delicious, they are a feast for the eyes.”
Tonstant Weader Reviews

As the oldest son of Bob and Rita Marley, Ziggy was raised with both traditional Jamaican food and the more natural and healthy “ital” food of the family’s Rastafari culture. The fifty-four recipes included in the book, inspired by Ziggy’s youth and accompanied by beautiful photos, are contributed by Ziggy, his wife Orly, his sister Karen, as well as renowned chefs Bruce Sherman (Coconut Carrot Curry), Ben Ford (Escabeche, Escovitch), and Leonie McDonald (Caribbean Salsa). Many of the recipes are vegetarian, vegan, and/or gluten-free.

From the introduction by Ziggy Marley:

“I first started dabbling in the kitchen as a teenager. I enjoyed making cornmeal porridge, and it helped me to begin appreciating the idea of nourishment, the idea that food can make your body feel better. I would make Irish moss and some of my dad’s juices…Our Rasta culture was different than regular Jamaican culture. We used to have both sides then, because my auntie would cook the more traditional Jamaican food. On the other side, our Rasta culture drew us to a different way of eating. My father would always have a lot of juices and greens and nuts. We were introduced to ital food–fresh, organic, and nutritious, less salt.”