Shaquille O’Neal, NBA legend, will be signing copies of “Little Shaq Takes A Chance” in Atlanta next month.

Shaquille O’Neal is a retired basketball legend, businessman and current analyst on the Emmy award winning show, Inside the NBA on TNT. During his 19-year NBA career, O’Neal was a four-time NBA champion, a three-time Finals MVP, a 15-time All-Star and was named the 1993 Rookie of the Year. Since his rookie year, O’Neal has been an ambassador for the Boy’s and Girl’s Clubs of America, a group with whom his relationship goes back to his youth in New Jersey. Passionate about education, he has earned his Undergraduate degree from LSU, MBA from University of Phoenix and his PhD from Barry University in 2012. 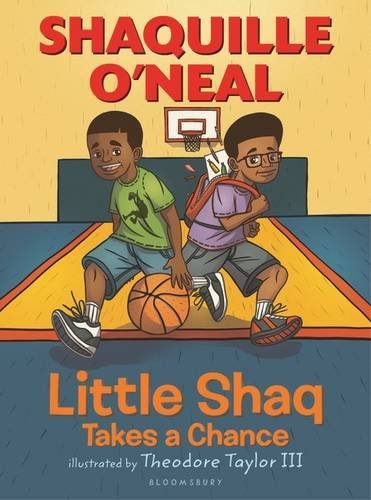 Like most kids, Little Shaq doesn’t love trying new things, especially if he might not be very good at them. So when his class is assigned projects for the school’s upcoming art show, he’s not sure that his skills will transfer from the basketball court to the art studio. Rosa Lindy and Barry have their projects all figured out. Can Little Shaq find the confidence to embrace his own style and create a piece for the show?

Continuing this series that celebrates community, family, and education, Little Shaq Takes a Chancewill inspire readers the to be brave, have fun, and love reading!