Will Power, former IndyCar champion, will be signing copies of “The Shear Force of Will Power” in North Carolina this month end.

Will Power is a performer and playwright whose plays have been produced at New York Theatre Workshop, the Actors Theatre of Louisville, La Jolla Playhouse and many others. His play The Seven won the Lucille Lortel Award for Best Musical and his solo shows The Gathering and The Flow have toured to over 70 cities. Power is currently on the faculty at The Meadows School of the Arts/SMU and the Andrew W. Mellon Foundation Playwright in Residence with the Dallas Theatre Center. 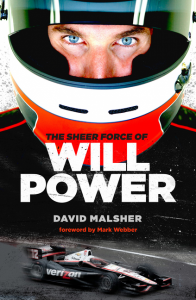 The story of 2014 Indy Car series champion Will Power. From the dirt tracks of Queensland, Australia, to the road, street and oval race tracks of America, join Will Power on his torrid 20-year ride to the top of Indy car racing, culminating in the 2014 IndyCar Series championship. Arduous both mentally and physically, Will’s journey pushes him to the limit as he finds fans and critics, friends and rivals – and eventually a reputation as the fastest racer in America. Off the track, Will is known as a man of individualism, dry humour, brutal honesty (particularly with himself), unshakable principles and a ferocious desire to learn fast and beat everyone else. All these qualities and more are revealed in a biography that will have you laughing, crying and in awe at just what it takes to rise to the top of professional racing. Will has taken the hard road, but a champion like Power would never do it any other way.