John Popper, frontman for Blues Traveller, will be signing copies of “Suck and Blow” at multiple locations during this April.

John Popper, hailed by many as the world’s greatest harmonica player, is the lead singer and principal songwriter of Blues Traveler, a quartet named after a Saturday Night Live sketch and a character in the movieGhostbusters. Popper has gained international renown for composing “Run-Around,” the longest-charting single in Billboard history, along with other radio staples such as “Hook,” “But Anyway,” and “Carolina Blues.” He has performed at the White House for three presidents, welcomed the Hungarian ambassador to the stage with his group, and inducted Carlos Santana into the Rock and Roll Hall of Fame. When not touring he makes his home in Snohomish, Washington.

Dean Budnick has reported on John Popper’s career in multiple settings, including feature articles and a cover story at Relix magazine, where Budnick serves as editor-in-chief. He also welcomed Popper as a host of the Jammy Awards, the event that Budnick co-founded and produced, and directed the documentary Wetlands Preserved: The Story of an Activist Rock Club, featuring Popper and his Blues Traveler band mates. Budnick has also written Ticket Masters: The Rise of the Concert Industry and How the Public Got Scalped and is a contributor to the Hollywood Reporter. For many years he co-hosted a weekly radio show on SiriusXM. Budnick holds a PhD from Harvard’s History of American Civilization program and a JD from Columbia Law School. He lives in East Greenwich, Rhode Island. 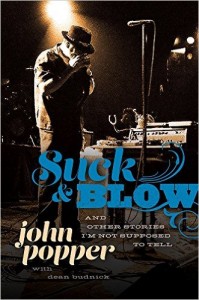 In Suck and Blow, John Popper recounts his early days of musical discovery, shares a forthright assessment of his longstanding battle with obesity, and discusses a range of topics, including life as a gun enthusiast, the vibrant New York music scene of the late ’80s and early ’90s, his wide- reaching political views, and his romantic travails.

Throughout these pages, Popper calls some musicians out, praises others, and talks about his successes and failures in a self-deprecating, laugh-out-loud voice. At the heart of it all is his love for the harmonica, which transformed him from a failing New Jersey high school student into a Grammy-winning musician. This memoir will captivate both steady supporters and newcomers alike, through his signature honesty, humility, and humor.