Troy Brown, who has played his entire 15-year career with the Patriots, and has earned three Super Bowl rings with the team, will be in Hingham, MA to sign copies of “Patriot Pride: My Life in the New England Dynasty” 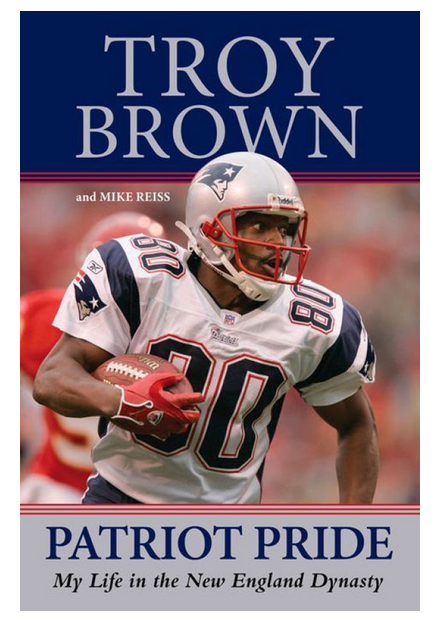 Spotlighting a New England sports icon, this autobiography chronicles the extraordinary life and career of Troy Brown, the talented athlete who played 15 seasons with the New England Patriots. Brown demonstrates how his grit, hustle, and hard work endeared him to a generation of football fans. Brown’s past is explored, relating how he made it through college and into the pros despite being given up on several times. His years with the Patriots are documented in detail, covering what it was like to play for Coach Belichick, why Tom Brady has been so successful, and the secrets behind his three Super Bowl wins. Traveling from his younger years in South Carolina through his college career in West Virginia and to the pinnacle of the NFL, this inspirational, rags-to-riches sports memoir will entertain, inform, and inspire football fans of all stripes, especially the hundreds of thousands of fans who support the Patriots—one of the most successful franchises in the league.

Troy Fitzgerald Brown (born July 2, 1971) is a former NFL player in the National Football League. He was drafted by the New England Patriots in the eighth round of the 1993 NFL Draft. He played college football at Marshall. On May 11, 2010, Brown was elected into the College Football Hall of Fame. In June 2012, Brown was voted into the New England Patriots Hall of Fame by fan vote.

He played on five of the eight Patriots teams to reach the Super Bowl, and he retired as the franchise leader in career receptions. His primary position was at wide receiver, but he also contributed as a punt returner and even played a little on defense as a cornerback.