Kathryn Sullivan, first American woman to walk in space, will be signing the copies of “To The Stars!” at the following location.

Carmella Van Vleet is the author of many hands-on science and history books and the middle-grade novel Eliza Bing Is (Not) a Big, Fat Quitter (Holiday House). To the Stars! is her first picture book.

Dr. Kathryn Sullivan is a distinguished scientist and renowned astronaut. She was one of the first six women selected to join the NASA astronaut corps in 1978 and holds the distinction of being the first American woman to walk in space. Dr. Sullivan flew on three shuttle missions during her fifteen-year tenure, including the mission to deploy the Hubble Space Telescope. She was confirmed by the Senate as the Under Secretary of Commerce for Oceans and Atmosphere and NOAA Administrator in 2014.

Nicole Wong has illustrated many books for children, including No Monkeys, No Chocolate; Maxwell’s Mountain; Wild Rose’s Weaving (Tanglewood Press); and “L” Is for Library (Upstart Books). 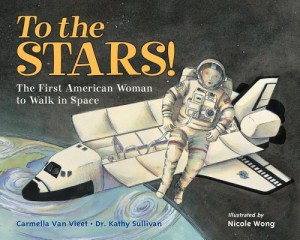 Kathy Sullivan wanted to go everywhere. She loved blueprints and maps. She loved languages and the ocean. She didn’t like the question, “What do you want to be when you grow up?” She wanted to explore and do exciting things that girls weren’t supposed to be able to do. Only men had the exciting jobs.

Kathy liked fishing and swimming; flying planes and studying science. That’s what she liked and that’s what she decided to do with her life. She followed her heart and eventually became a NASA astronaut and the first woman to walk in space. Kathy wanted to see the whole world and so she did: from space!

Backmatter includes further information about Dr. Sullivan and her career, as well as other famous firsts made by women astronauts.