Tom Jones, singer & sex god, will be signing the copies of “Over the Top and Back” at the following location.

Tom Jones was born Thomas Jones Woodward in South Wales to a traditional coal-mining family. He began singing at an early age and landed is first record contract in 1964, winning a Grammy in 1965 for “It’s Not Unusual.” Knighted by Queen Elizabeth in 2006 for his services to music, his recordings have spanned the spectrum of musical styles over 60 years. He lives with his wife of 58 years, Melinda, in Wales and California. They have one son. 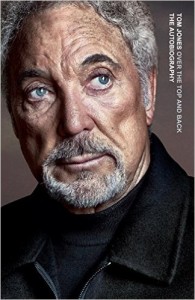 Across six decades, Sir Tom Jones has maintained a vital career in a risky, unstable business notorious for the short lives of its artists. With a drive that comes from nothing but the love for what he does, he breaks through and then wrestles with the vagaries of the music industry, the nature of success and its inevitable consequences. Having recorded an expansive body of work and performed with fellow artists from across the spectrum and across every popular music genre, from rock, pop and dance to country, blues and soul, the one constant throughout has been his unique musical gifts and unmistakable voice.

But how did a boy from a Welsh coal-mining family attain success across the globe? And how has he survived the twists and turns of fame and fortune to not only stay exciting, but actually become more credible and interesting with age? In this, his first ever autobiography, Tom revisits his past and tells the tale of his journey from wartime Pontypridd to LA and beyond. He reveals the stories behind the ups and downs of his fascinating and remarkable life, from the early heydays to the subsequent fallow years to his later period of artistic renaissance.

It’s the story nobody else knows or understands, told by the man who lived it, and written the only way he knows how: simply and from the heart. Raw, honest, funny and powerful, this is a memoir like no other from one of the world’s greatest ever singing talents.

This is Tom Jones and Over the Top and Back is his story.