Bridget Moynahan, star of “Blue Bloods”, will be signing the copies of “The Blue Bloods Cookbook” at the following location.

BRIDGET MOYNAHAN plays Erin Reagan on CBS’ Blue Bloods. Moynahan’s film credits include I, Robot and The Sum Of All Fears, and she portrayed Carrie’s rival and Mr. Big’s wife on Sex And The City. Born in Binghamton, New York, Moynahan now lives in NYC and LA.

WENDY HOWARD GOLDBERG is the bestselling co-author of two books, Marry Me and Hollywood Moms. Wife of Leonard Goldberg, executive producer of Blue Bloods, Wendy is also the founder of a performing arts summer school in California. 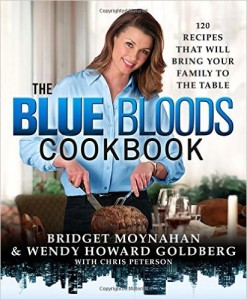 ERIN REAGAN: How many times have you and I been setting the table together for Sunday dinner?

Anyone who has ever seen the hit TV show Blue Bloods knows that the family dinner is the centerpiece of every episode. And there are really only three things that Blue Bloods-and everyone else-need to make a successful family dinner: family, love and food. Bring the first two to the table and The Blue Bloods Cookbook will provide the third!

Bridget Moynahan, the show’s star, invites you to partake in that sacred family ritual, offering food lovers more than 100 delectable recipes and bringing you Irish/Italian comfort food that will make you feel right at home, including:

Just as there is a chair around the table for every family member, there is a recipe in this cookbook sure to make any eater happy to be home again. Hearty and soulful, The Blue Bloods Cookbook will make you say, “Amen, now pass the potatoes!”